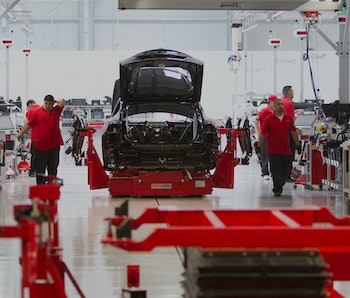 Sources told CNBC that tens of thousands of these models have already shipped out to customers in the U.K., Australia, China, and Europe. And no, Tesla hasn’t told these customers their vehicles will be arriving without the steering components, in case you were wondering. Tesla has said nothing about the change at all, in fact.

The parts in question aren’t technically required for the vehicles to operate properly, to be fair. The electronic control unit that’s been removed is redundant for most operations; the Model 3 and Model Y can both use “level 2” driving features — like the much-maligned Autopilot — without the part.

Those hoping to eventually use their vehicles for Tesla’s still-dangerous Full-Self Driving software will be entirely unable to do so without that duplicate steering control. So there’s that.

Generally unnecessary — The missing components are backup, for the most part, in case the main steering unit malfunctions or dies. As CNBC points out, this is an easy enough part to take out without actually affecting the car’s main functionality.

It’s a cost-saving measure for Tesla — at least in the short term. The company could face bigger problems in the future, as those looking to upgrade to Tesla’s autonomous driving software (known as “level 3”) won’t be able to just download it and get on the road. They’ll have to bring their car to a Tesla dealership for that redundant control unit to be added before Full Self-Driving can be activated.

Musk has on more than one occasion boasted that all Tesla vehicles would be hardware-ready when the time came to download the Full Self-Driving software. He’s broken that promise at least once already with older Teslas; removing this redundant part means newer vehicles aren’t eligible for the upgrade, either.

Secrets secrets are no fun — Okay, so Tesla’s decision to cut this part won’t really affect most customers’ driving experiences. It’s not a safety hazard either, according to experts.

More pressing, though, is Tesla’s willingness to remove a part in tens of thousands of vehicles without saying anything to the public — or even to customers who have purchased the altered vehicles. Some might argue otherwise, but this really amounts to lying by omission. How is the public expected to trust Tesla’s vehicles when the company won’t even communicate hardware changes?

The reasons behind Tesla’s silence here is unclear, though we’d suggest it has something to do with investor pressure leading up to the company’s Q4 2021 earnings report. And, of course, there’s the Elon Musk of it all. Trustworthiness isn’t really his thing.