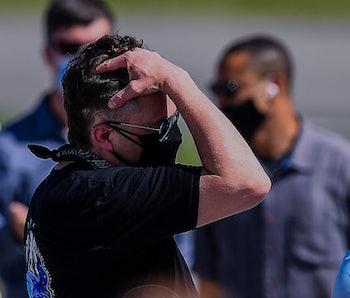 Billionaire Boyz Club member and the first guy to always comment on a Twitch gamer girl’s stream chat, Elon Musk, is now “semi-separated” from his hyperpop star partner, Grimes (née Claire Boucher). Speaking with Page goddamn Six, the Technoking of Tesla explains that the two “are semi-separated but still love each other, see each other frequently and are on great terms.”

Musk cites his globetrotting work expanding on both his Tesla grift and DoD-funded SpaceX projects as one of the main impediments to their marriage. Grimes, meanwhile, is “primarily in LA” and was apparently in the “adjacent room” watching “Baby X” at the time of Musk’s exclusive reveal to — and we cannot stress this enough — Page Six.

Most recently, Musk’s SpaceX made news for sending the first all-civilian astronaut team into space in a capsule with a clogged toilet.

A relationship as shaky as a ride in a Tesla — The dissolution of the Musk-Grimes union comes as Tesla faces renewed scrutiny from government and safety oversight organizations for a number of issues and overpromises concerning the electric vehicles’ purported “self-driving” capabilities. Apart from vastly overpromising the technology’s abilities, Musk and Tesla’s autopilot feature also (unsurprisingly) isn’t great when it comes to the actual driver’s ability to concentrate or manually take over quickly enough. Elon Musk overpromising on his product? Shocked. Absolutely shocked, we tell you.

What happens next is anyone’s guess — Of course, no matter how amicable Musk describes Grimes’ and his dissolution to...sigh...Page Six, it’s anyone’s guess how this will play out in the coming months. The two welcomed their first child named...SIGH...X Æ A-Xii Musk in May of last year. We doubt there’ll be any kind of nasty legal situation here, but Musk does love to pretend he’s some kind of half-assed agent of chaos, so who the hell knows?

As for Grimes, we assume this will turn into some kind of origin story for her own supervillainess arc, which we will continue to monitor closely in the days and weeks ahead. Taking bets now on which gives their “tell-all” side of the story to TMZ first.