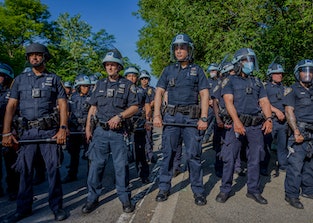 The collective size of the sensitive files from at least 200 police departments across the United States.

A group of journalists, technology experts, and social justice activists working under the gloriously apt name "Distributed Denial of Secrets" have exposed hundreds of thousands of files containing sensitive data from at least 200 police departments across the US. The collection went live on Juneteenth and has since gone viral on Twitter.

The creators have dubbed the collection "BlueLeaks" and note that it contains a decade's data "from over 200 police departments, fusion centers, and other law enforcement training and support resources. Among the hundreds of thousands of documents are police and FBI reports, bulletins, guides, and more."

Motherboard, which first reported on the leak, says DDoS claims not to espouse any particular political or social beliefs "beyond ensuring that information is available to those who need it most: the people." Twitter evidently doesn't agree, though, as it on Tuesday suspended the group's Twitter account.

"Additionally, the data dump contains emails and associated attachments," the NFCA alert states. "Our initial analysis revealed that some of these files contain highly sensitive information such as ACH routing numbers, international bank account numbers (IBANs), and other financial data as well as personally identifiable information (PII) and images of suspects listed in Requests for Information (RFIs) and other law enforcement and government agency reports."

People deserve to know — There is a strong possibility that those more supportive of police forces in the United States — despite their failings and overreaches — will condemn BlueLeaks. But an argument in favor of the exposed information already exists: The public deserves to know what law enforcement does behind the scenes. This leak provides a glimpse into police responses to the Black Lives Matter protests, how coronavirus cases were handled, and much more. The DDoS' founder Emma Best elaborated on the need for unfettered access to such data for the public's knowledge and good.

"It's the largest leak of US law enforcement data, and because of its nature it lets people look at policing on the local, state and national levels," Best told Motherboard. "It shows how law enforcement has reacted to the protests, it shows government handling of COVID, and it shows a lot of things that are entirely legal and normal, and horrifying."