SXSW 2020 won't be canceled over coronavirus... for now (updated)

“Today the threat of community spread remains low, but we are prepared for it to happen here.” 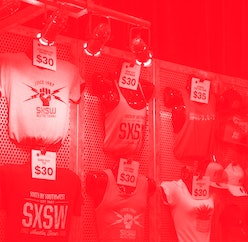 Despite concerns over the novel coronavirus (COVID-19), SXSW 2020 is moving forward as planned. In a press briefing today in Austin, Texas, Travis County health officials announced that "right now there's no evidence" that closing SXSW would be any safer for the community, although that might change if the virus becomes more of a serious threat in the area. At the moment, Austin doesn't have any confirmed cases of people who have contracted COVID-19, but there is at least one person being tested and the results of are still pending.

"Today the threat of community spread remains low, but we are prepared for it to happen here," Dr. Mark Escott, interim Health Authority for Austin Public Health, said early on Wednesday. "We expect in the future there may be modifications," he added, noting that SXSW organizers have been "extremely responsive to mitigation strategies."

"Safer" — Escott's argument for not forcing SXSW 2020 to cancel is that, if it were to happen, people who had already planned to attend the event would show up to Austin regardless. He said that by having the structure of SXSW 2020, which is scheduled to begin on Friday, March 13, it will be easier to offer people things like hand sanitizer and to keep venues cleaner.

That seems like quite a peculiar approach to what's quickly becoming a global pandemic, considering how having more than thousands of people interacting with one another at a conference probably isn't the best idea right now. During the media conference, Escott kept mentioning that another way SXSW could mitigate the spread of coronavirus would be with "social distancing," meaning the organizers could limit the amount of people who could attend a keynote, panel, or concert.

SXSW had more than 73,000 attendees last year, so somehow that still doesn't seem like a "safer" solution for the Austin community.

A forced hand anyway? — While Austin and Travis County health officials are backing SXSW to continue as planned, the event may be forced to cancel as a result of big-name companies dropping out on their own.

Facebook, Twitter, TikTok, Intel, Vevo, and The CW have all already revealed they won't be attending SXSW 2020 as a precaution, and chances are many more brands will join that list before the show starts. It's similar to what happened with Mobile World Congress 2020 — the conference was hesitant to cancel at first, but eventually had no choice but to do so since their A-list attendees made the decision to back out.

SXSW, whether organizers like it or not, may have to deal with a similar fate — which would be best and safest thing for everyone involved.