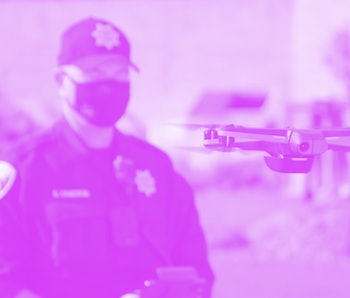 Some of you probably remember that whole to-do in the ‘90s and early 2000’s about Big Pharma sales reps ingratiating themselves into the good graces of our nation’s doctors through a mixture of flattery, flashy incentives, and good ol’ fashioned lies in order to push their “wonder drug,” Oxycontin. There was even a book about it — oh, and also a recent miniseries co-starring the objectively best Batman.

In case you were wondering who could look back at that situation and think, “Gee, now there’s a sales strategy worth emulating,” we have an answer for you right here: Private surveillance tech companies looking to hawk their latest Designer Dystopia drones. And who are their more-than-willing marks? Yep, you guessed it: Why, our nation’s best and brightest narcs, of course!

Officer Pitt — A new and infuriating investigation from Motherboard published yesterday details the many ways in which surveillance tech firms like Skydio have made a very cozy, very profitable bed in local police departments. What’s more, the cops are also doing gangbusters (no pun intended). “Skydio has been good at creating fans among cops who then help the company sell its products, according to a cache of thousands of presentations, emails, contracts, and webinars,” explains the article, later adding that the company has hired “at least one” police officer as a spokesperson to shill their drones to law enforcement departments across the country.

“Will you be in uniform/willing to appear in the video?,” one Skydio rep emailed a cop regarding an upcoming promo shoot, promising their video crew, “will have [them] looking like Brad Pitt.”

“[L]et me know if we can launch you into a second career in Hollywood!” the message concluded. Ha ha ha! Just having a lil’ fun in our panopticon experiment of a country.

Policing under the influence — Although we’ve been aware of Skydio’s police dealings for over a year now, the knowledge that they are roping in actual cops onto their payroll is just icing on the cake, really. And while comparatively smaller business like Skydio is far from the only company aggressively pursuing profits through police department contracts. Amazon has long been known to supply copious amounts of data collected via its Ring home security products to local cops, for example.

While not surprising, it’s all still very, very disheartening, and there doesn’t seem to be an end in sight.