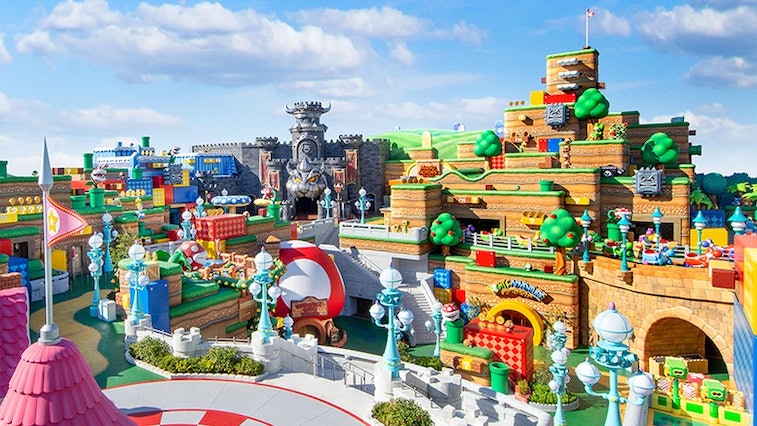 Well, would you look at that. There's a light at the end of the bright green warp pipe, after all: After years of hype and months upon months of delays, Universal Studios Japan's incredible looking Super Nintendo World is finally opening its doors later this month. According to an official announcement today, the all things Mario amusement park will begin admitting visitors on March 18. That means, as of writing this, you only have ten days to book your flight across the Pacific to get in on that sweet, sweet, nostalgic goodness.

For months, Super Nintendo World has essentially just been sitting there, waiting for us to enter its gates and take all our money, but of course the pandemic threw a hefty wrench into those plans. Nintendo and Universal Studios have done a good job of continuing to drum up hype despite repeated (albeit completely understandable) delays, but with multiple vaccines becoming increasingly available to the public, it appears that Japanese officials feel it's finally safe enough to move ahead. Personally, we're just happy their cute train to nowhere finally has its destination.

The entire park is its own game — Aside from looking absolutely picture-perfect, Super Nintendo World appears to be more than your standard themed amusement park. While we'd have been totally content with just the Mario Kart bumper cars, the experience also includes purchasing wearable "Power-Up Bands", which turn the entire place into a larger competitive game featuring a park map, hide-and-seek challenges, and mini-games. These features earn visitors digital rewards, the rarest of which somehow unlock group battles against Bowser, Jr. (which, c'mon, that sounds dope as hell).

Plenty of Mario content available for the rest of us — Of course, the vast majority of us aren't realistically able to head over to Super Nintendo Land anytime soon, but that doesn't mean we're in any way starved of Mario content. Recently, Animal Crossing players could play around with Nintendo-related crossover additions including warp pipes and level flagpoles, and beginning last month, fans could even begin purchasing limited edition, Mario-themed Switch consoles. If all that still isn't enough, take heart: Super Nintendo Land won't remain a Japanese exclusive forever. Universal Studios Orlando is set to open its own sibling location, presumably with no passport needed for entry. Unfortunately, COVID-19 took its toll on the second park's release window, too, with an opening delayed until at least 2025.