Substack CEO courts Dave Chappelle, because of course he did

“Dave Chappelle is welcome on Substack. We don’t think the answer to speech you disagree with or that you find offensive or challenging is to shut it down.” 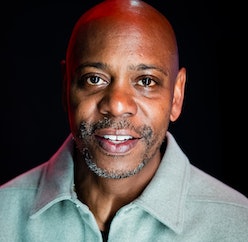 Chris Best, the co-founder and current CEO of Substack, Inc., is totally cool with comedian and self-described TERF, Dave Chappelle, joining the popular newsletter hosting platform, because... y’know... free speech. “Dave Chappelle is welcome on Substack,” Best said yesterday during The Wall Street Journal’s Tech Live Conference, “We don’t think the answer to speech you disagree with or that you find offensive or challenging is to shut it down.”

Substack’s popularity has risen dramatically in recent years, advertising itself as a potentially lucrative publishing alternative for writers, journalists, and other media workers. It’s also reaped its own massive financial success by wooing a lot of “both sides” bullshit from the likes of Glenn Greenwald, Andrew Sullivan, and Matthew Yglesias, so Chappelle’s hypothetical addition to the roster would make perfect sense to someone like Best.

Given that Netflix doled out $24.1 million for Chappelle’s most recent standup special (and purportedly final for the platform), it’s probably unlikely the comedian will start up Chappelle’s Substack anytime soon... but a CEO can dream, we suppose.

Netflix walkout scheduled today — Best’s welcoming of Chappelle came the day before trans Netflix employees (along with many allies) have planned a mass walkout protest of the streaming giant’s inclusion policies and content decisions. Ted Sarandos, the company’s co-CEO, has somehow managed to screw the pooch multiple times over during the entire controversy, and although he appears to be somewhat coming around to the mistakes, a lot is still left up in the air regarding how Netflix will move forward.

And now for something slightly more positive — It’s not all bad decisions from media corporations, though. Earlier this year, Substack announced it struck deals with multiple comic book writers and artists to begin hosting their work on the platform. If any industry rivals media for terrible worker compensation, it’s the comic book world — so seeing a new venue for these creators to be adequately paid for their work is certainly a welcome silver-lining to all the other awfulness.