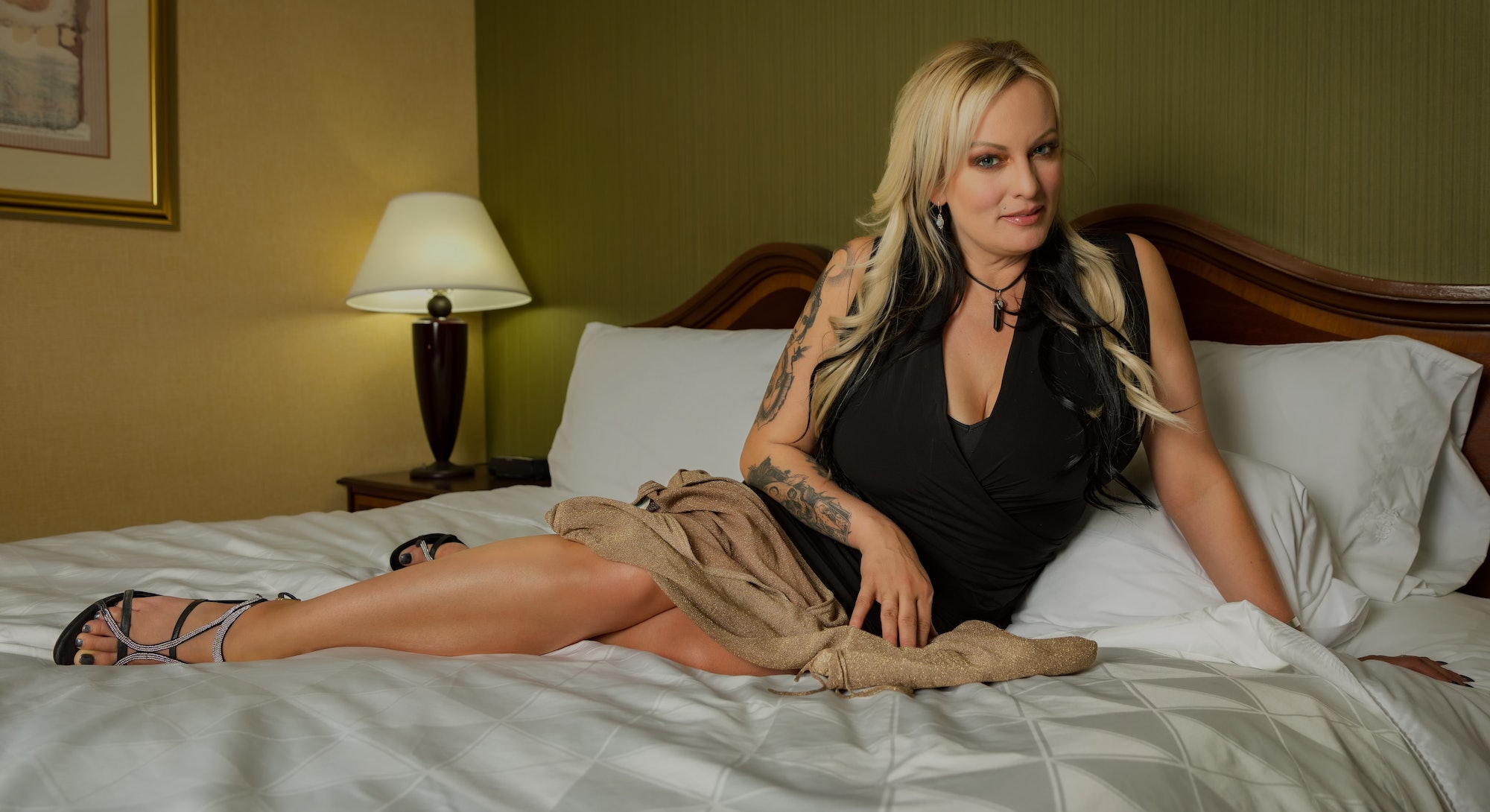 Like wide swathes of the general public, Stormy Daniels had a hard time wrapping her head around the concept of NFTs.

Now, however, the 42-year-old Daniels, who allegedly had an affair with Donald Trump in 2006, is getting into NFTs in a big way, via a partnership with adult NFT marketplace xxxNifty.

Beginning at 5 p.m. Eastern Time tonight, she’ll be auctioning off an NFT of her holding the gold cocktail dress she was wearing when she allegedly went back to Trump’s Lake Tahoe hotel suite for what she’s called “the worst 90 seconds of my life.” (Trump has denied having a sexual encounter with Daniels.)

More significantly, the winner of the auction also gets the garment itself. Bids start at $690, and the auction ends Thursday, December 9, at 2 p.m.

In addition, Daniels is currently selling three NFTs — two selfies and a promotional photo from her upcoming ghost-hunting series Spooky Babes — on her xxxNifty creator page.

Daniels recently phoned Input from New Orleans, where she resides in “a haunted church,” to talk about the Trump dress and other outfits she’s clearing out of her closet to auction off on xxxNifty. The following interview has been condensed and edited for clarity.

Why did you end up partnering with xxxNifty?

The main reason that I chose to go with them is because they have what they call “unlockables” — when people win, they get something extra. Because I have all these cool things from movies I’ve done, and I don’t want to just throw them out or give them away.

But I also have all these amazing semi-famous outfits from the big movies I’ve done over the years that fans would love to have. You know, fans email me all the time: “Do you have any shoes to buy?” “Do you have any of this?” And this is a fun way to get these items out of my storage unit into the hands of people who would actually really appreciate them.

Before we get back to those unlockable items, you already have three NFTs for sale at xxxNifty, including two selfies. Tell me about those NFTs.

There’s hundreds of thousands, possibly millions, of photos of me out there because I was a model for so long. So we wanted to do something that no one had seen before. And [xxxNifty was] like, “Honestly, your stuff is so polished” — because I was under contract with Wicked Pictures — that we just decided to do something completely different.

So tell me about the Trump dress.

It’s not in the photos from that day, because the photos from that day were taken in the gift room at the golf tournament. But I was famously invited to dinner. So I changed into a little cocktail dress and went to meet him for dinner. It’s a little gold cocktail dress that I bought from Marciano. I was offered money for it five or six years ago or whatever it was, and I was just like, “No.”

The next one we’re going to do is the one-of-a-kind blue dress that was given to me from my photoshoot from Vogue that I also wore on the red carpet to the AVN Awards.

When I told a friend of mine about the Trump dress, she said that it belongs in the Smithsonian.

Well, maybe the Smithsonian will win it.

It’s funny, because everybody was like, “Well, why didn’t you have a DNA test?” And I was like, “It’s not like the Monica dress.” It wouldn’t have anything on it. It was on the floor across the room. Not to be gross, but — I don’t know how you can put this in PC terms — he didn’t come on my dress.

So I have no way of proving that that’s the dress I had on that night. There were witnesses that saw me in it, but I don’t know if they’ll ever speak up. But it is the actual dress.

I read that Michael Cohen is planning on selling his own NFT, of the $130,000 check he wrote you to keep quiet about your alleged affair with Trump.

Are you serious?! I’m going to text him after this and be like, “Where’s my half?”

How much are you hoping that the Trump dress and the Vogue dress sell for?

I wouldn’t even know what to say. I hope it goes someplace cool. Like they were talking about how an auction house might end up actually bidding on it through this. And that that would be kind of cool.

In my perfect vision, that beautiful blue gown that I wore in Vogue — which was such a prestigious shoot, by Annie Leibovitz — is treated with respect. It’d be on this hot mannequin — like a shapely, big-busted mannequin — under lights, and I get maybe 10 or 20 grand for it.

But in reality, it might go for $200, and some guy might have it on in his mom’s basement — while tucking in, Buffalo Bill–style. Yeah. That’s my luck. And he’s gonna send me selfies of him, like, wiping his ass with it every day for the rest of my life.

I hope for your sake it’s a higher-end buyer.

You know, nothing ever goes quite according to plan — but it’s always an adventure with me.

What other outfits will you be auctioning off?

I’ve got some really strange stuff. I have the boots I wore in my Predator series, which was an all-girl series I wrote, directed, and starred in for Wicked. I have my famous camo shorts and the life preserver that I handmade, from Operation: Tropical Stormy, which won a bunch of awards.

So I’m unclear if you still consider yourself an adult performer?

But the high-end, big-budget adult features are gone. Just due to the tube sites and piracy. The last five or six years I was there, I was doing some of the best stuff I’ve ever done. But I was watching my budgets just shrink and shrink and shrink. It’s like I was just 20 years too late.

Are you expecting criticism that you’re cashing in on your relationship with Trump?

Totally. One hundred percent. One hundred percent. That’s why I think I waited so long to do it. But other people are cashing in on me and this and that. And at this point, I have no fucks left, honestly. I have something of value that I’ve just have hidden away. I mean, I have legal bills to pay, so I might as well take the money and do something with it.

“What is this fear that I have over this item that’s potentially very valuable that I’ve just been hoarding away in a closet?”

I think I’ve proven that I don’t really care too much about criticism. So what is this fear that I have over this item that’s potentially very valuable that I’ve just been hoarding away in a closet? It seems like such a wasted opportunity.

Do you expect to hear anything from Trump himself about the dress sale?

No, of course not. Although, how entertaining would that be if he were the one who bought it and started sending me selfies? I mean, literally, at this point, anything is possible. Like the shit that I’ve seen in the last five years. And then the last two years working in paranormal.