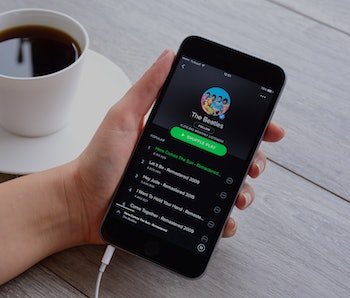 Clubhouse mania has officially infected Spotify. The company announced that it has acquired Betty Labs, which created the live sports audio app, Locker Room. It hasn’t said how much the acquisition cost.

While Locker Room will remain in the App Store for now, Spotify says that it will eventually undergo a brand makeover with a new name, which it hasn’t revealed yet. Additionally, Locker Room will hit Android in the near future — good news for the crowd that resents Clubhouse’s exclusive, invite-and-iOS-only nature. Spotify calls this acquisition an attempt to "accelerate [its] entry into the live audio space" with an emphasis on music, entertainment, culture, and sports. It also plans to offer "interactive features" between content creators and audiences.

Spotify's chief research and development officer Gustav Söderström said, "Creators and fans have been asking for live formats on Spotify.” A live audio feature would be a "powerful complement that will enhance and extend the on-demand experience we provide today." If Söderström and co. get the formula right, the company might dethrone Clubhouse as the current king of live audio chat.

Beat your rivals — Spotify has aggressively bolstered its efforts to gain market profitability. With an advertising suite and the powerful acquisition of Megaphone, the popular podcast technology firm, the company is doing everything it can to dominate the podcast wars. Spotify's audio advertising marketplace, the Spotify Audience Network, its Originals and Exclusives, plus Megaphone and Anchor podcasts are just some of the company's latest developments that demonstrate CEO Daniel Ek's hunger to crush all competition from formidable rivals like Apple and Amazon.

Podcasts aren't the only thing on Ek's mind, though. With news surrounding an approved patent that would identify a Spotify user's personality traits as well as the surroundings they listen to audio content in and a possible entry into film-making thanks to Spotify’s cozy relations with HBO Max, the company’s itch to reign over competitors well beyond the podcast industry is more than obvious.

So it’s no surprise that Spotify has become the latest company to hop on the Clubhouse wave. It’s far from the only one to do so. Soon after the live audio chat app hit iOS, giants like Twitter came out with Spaces, Facebook was said to be working on its own Clubhouse equivalent, and billionaire Mark Cuban was reported to be testing waters with Fireside. The craze is so hot that, of course, miscreants created a fake Clubhouse Android app riddled with malware, which you shouldn’t download at all.