“We don’t fit neatly into just one category. We’re defining an entirely new space of tech and media. We’re a very different kind of company, and the rules of the road are being written as we innovate.” 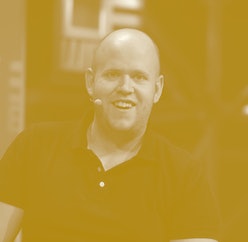 During an internal town hall meeting, Spotify CEO Daniel Ek finally decided to address the elephant in the room by the name of Joe Rogan. Ek provided a 15-minute monologue first, according to an audio recording obtained by The Verge, and later answered employees’ direct questions about their concerns.

“I understand the premise that because we have an exclusive deal with him, it’s really easy to conclude we endorse every word he says and believe the opinions expressed by his guests,” Ek said. “That’s absolutely not the case.”

The backlash to Spotify’s continued distribution of Joe Rogan’s podcast has been intense, but executives haven’t really spoken to Spotify employees about the ongoing discourse until this week. Ek’s defense here is truly all over the place; it’s not difficult to imagine he’s been making a long list of affirmations in the last few weeks in anticipation of this moment.

Ek’s meticulously prepared speech didn’t do much to quell employee concerns, though. Those in attendance pressed back on his assertions, unwilling to let the CEO get off so easy. Spotify may have made up its mind about keeping Rogan on the platform, but the unrest he’s caused is far from settled.

Nice try, Ek — In an attempt to cover all his bases, Ek has decided to cast a very wide net around his defense. And he does acknowledge right away that he understands some employees “feel disappointed, or angry, or even hurt” by the content’s continued presence on Spotify.

Just after acknowledging this fact, Ek goes on to explicitly defend Spotify’s continued exclusivity deal with Rogan. He first brings up the debate over whether Spotify is a platform or a media company, to which he says: “We don’t fit neatly into just one category. We’re defining an entirely new space of tech and media. We’re a very different kind of company, and the rules of the road are being written as we innovate.”

Ek does say in his speech that he doesn’t necessarily back the content Rogan includes on his podcast. In fact, he goes as far as to say there are “many things that Joe Rogan says that I strongly disagree with and find very offensive.”

He points out as well that Spotify hosts Rogan’s podcast but doesn’t have any say in editing decisions. This, he reasons, is what separates Spotify from other publishers. It’s just a platform.

Who cares what we call it? — Ek says more than once in his speech that the situation is “incredibly complicated.” The problem with this line is that the situation really isn’t all that complex at all. We can outline it in one sentence, even. When faced with the decision between money and curbing misinformation, Spotify chooses money.

Ek’s willingness to lean on semantics as a defense mechanism is flimsy at best. As Netflix found out last year, defending your dangerous content on the basis of just being a conduit rarely works in action.

It’s one thing for Spotify to make an executive decision to keep Rogan around, misinformation be damned. It’s another entirely for the company’s many employees to feel comfortable with that decision. Ek doesn’t seem too concerned about the latter.