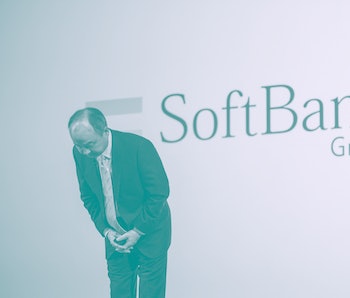 Masayoshi Son, CEO and founder of SoftBank, will be stepping down as a director from the board of Alibaba Group, the Chinese e-commerce giant. Son made the surprise announcement at Alibaba’s annual shareholder meeting today, Bloomberg reports. He's been on the board since 2005, having invested in it six years earlier.

Son’s departure will mark the end of his more than two decades of work with Alibaba that's seen it go from scrappy startup to behemoth. He invested a $20 million stake in the company in 1999 when it was founded by Jack Ma. The company went on to become a multi-billion dollar enterprise, and one of the jewels in SoftBank's investment crown.

To complicate matters, Jack Ma is stepping down from SoftBank’s board at the same time, a position he's held since 2007. Ma and Son have been close friends since the two meet through Alibaba at the turn of the millennium. Despite the strange timing, the friends aren’t breaking up, exactly. “It’s not like we had a fight,” Son said during the Alibaba shareholder meeting. “This was perfectly amicable.”

Still, it’s difficult to imagine a scenario where the pair didn’t have some sort of falling out or at least come to a mutual understanding that their respective businesses would be better off without each other. Both Alibaba and SoftBank thrived for the most part during the last decade — it will be interesting to watch the companies continue to evolve without the mutual support from Ma and Son.

SoftBank and Alibaba are still tight — For the most part, Son’s departure from Alibaba and Ma’s from SoftBank won’t affect their companies. This is especially true if Son’s statement is to be believed; the pair will likely still rely on each other for business advice even if it’s just in the background.

Plus, SoftBank is still a major investor in Alibaba; Son’s $20 million buy-in from 1999 is now worth upwards of $150 billion. Son used this stake to raise some much-needed capital during SoftBank’s financial struggles last year as it lurched from one disaster to another.

SoftBank is flailing a bit — Though SoftBank is, as a whole, still worth hundreds of billions of dollars, the company has been stuck in a shitstorm created by WeWork, and other misguided investments, like the huge losses it incurred on a robot pizza business that never came to fruition.

When SoftBank first bought a $300 million stake in WeWork back in 2017, the future looked bright and profitable. Shared workspaces at ridiculously high prices? Count us in. That investment engorged to $4.4 billion later that year.

But 2019 was a very dark time for WeWork, complete with billions in losses and a botched IPO. Things got so bad that SoftBank pulled the plug on a $3.3 billion investor buyout plan in April — a plan mostly set to help WeWork founder Adam Neumann, who is now suing SoftBank over its decision to renege.

SoftBank is still backing WeWork with other funds, but by all accounts, the companies won’t be working together for much longer.

A bright future, perhaps — Son and SoftBank are now in the process of offloading 4.5 trillion yen (about $42 billion) in assets for stock buybacks and debt payments. Despite the investment firm’s recent troubles, Son was optimistic as usual in the company’s recent investment meeting.

Son says he’s “graduating” from Alibaba’s board. It’s the end of an era for sure — one that will hopefully give him more time to figure out where SoftBank fits into the new decade, and how it can rehabilitate its reputation.