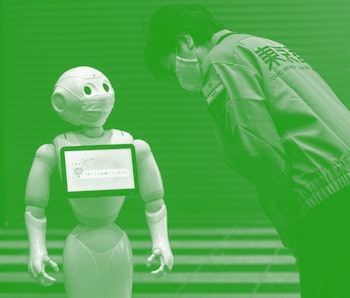 SoftBank's Pepper robot has already debuted at sports stadiums as a COVID-era stand-in, cheering on athletes in lieu of actual crowds. It makes for a bizarre, and yet, kind of adorable spectacle with the earnest-looking robot waving its arms in the air. Now, Pepper's job description has gotten a few notches more serious: enforcing mask-wearing rules to mitigate COVID-19 transmission.

On YouTube, Softbank recently announced that Pepper will have the ability to audibly remind people to wear their damn face masks in public. In addition to being able to work in retail, banking, hospitals, and more, Pepper could help regular store owners and other business operators with a crucial — and strangely controversial — reminder for customers to cover their faces. This issue over the past few months has revealed just how obstinate some people can be. Good luck, little guy.

What will Pepper do? — According to SoftBank, Pepper will make use of its image recognition system via artificial intelligence and its "Single Shot Detector" by checking the faces of up to five people at once. Now, if you're wearing a mask, a green box will appear around your face on Pepper's screen. But if you're without one, Pepper will make a red line appear around you and request you to wear one.

Depending on the establishment where Pepper is used, it is possible that business owners may place face masks nearby for Pepper to offer to customers. In an admittedly cute fashion, Pepper also has the ability to thank people for wearing masks, too. It's a sweet gesture.

What about my data? — According to the company, Pepper does not store your data, including your personal photos. Its job is primarily to assess the presence of face masks. Over time, the robot is expected to improve its analytics by learning through received input and will provide numbers to its owners, including the number of people that wore masks and the number that didn't. This kind of information could strongly help with tracing possible cases or at least keeping an eye on people's presence and foot traffic in buildings and other venues.

The wide-eyed bot's creators say that Pepper has infrared sensors as well as 2D and 3D cameras for omnidirectional movement. Pepper is a polyglot as Softbank notes that it can speak 15 languages, including English, French, Spanish, German, Arabic, Dutch, Italian, and more. So a multilingual anti-mask crowd shouldn't be a problem (but hopefully Pepper doesn't have to handle that mess).