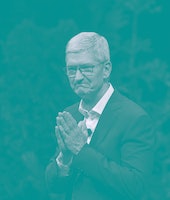 How much, in Apple shares, Cook donated to an unnamed charity at the end of 2019.

An SEC filing revealed on Thursday that Tim Cook donated $2 million in Apple shares to an undisclosed charity at the end of December. It’s yet another contribution made by Cook, who has a record of donating to unnamed organizations, including public vows to donate to the Amazon rainforest relief efforts, the California housing crisis, and several human rights groups.

Systemic philanthropy — As mentioned before, this won't be the first time that Cook contributed to a charity. In August 2019, SEC filings released at the time showed that the Apple CEO donated almost $5 million in Apple shares to a charity. Similar to the most recent report, Cook did not reveal the name of the organization.

In 2018, Cook contributed a similar amount to yet another undisclosed charity group. Of known organizations, the Apple CEO has donated to the Robert F. Kennedy Center for Justice and Human Rights as well as the Human Rights Campaign. He’s also talked about increasing the biodiversity of the Amazon rainforest in the aftermath of the 2019 fires. In 2015, Cook vowed that he would donate his entire fortune, worth at least $800 million at the time before he dies. In an interview with Fortune magazine, Cook said that he was aiming for a systemic approach to philanthropy by giving his wealth away.

Cook’s record versus Jobs’ record — Cook's reported focus on contributions to anonymous charities seems to be in contrast to what Steve Jobs was known for. Reports going back to the early 2010s revealed that Jobs wasn't exactly keen on philanthropy. People repeatedly pointed out that he indeed had incredible wealth but he appeared uninterested in public charity, and that revelation was met with disapproval, naturally.

It’s a debate that has been going on for years. On one hand, Jobs’ defenders (and there are many) argue that his technological innovations made breathtaking contributions to society’s advancement and that should be seen as his “donation” to the world.

But critics counter this by saying that one can create life-changing tools for the world, reap the financial benefits of such creativity, and still help struggling nonprofits out with some of that money. Cook appears to be aligned with the second crowd, and people seem to love him for it.