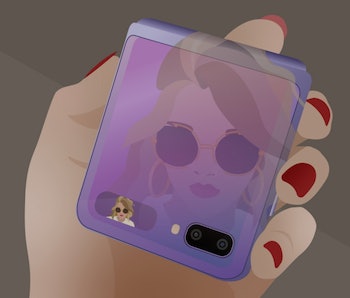 Samsung’s foldable phones have come a long way since they first hit the market. Both the Galaxy Z Fold and Galaxy Z Flip lines are great phones now, even if they happen to be very expensive. The screens don’t break nearly as much as they used to, which is in itself an accomplishment for foldables.

But Samsung isn’t ready to let its foldables coast on their own merit just yet. The company released a fresh marketing campaign this morning with influencers as its target audience, in which the company says the Galaxy Z Flip is made for “fast-paced, modern lifestyles and for those who aren’t afraid to make a statement.”

No shade here, but Samsung’s influencer-focused campaign is a little cringe. This is not to say Samsung’s assertions in the ad are false — the Galaxy Z Flip could definitely be used as a “creative powerhouse” — but the campaign is a reach. Any smartphone can take selfies.

Let’s look at the material — Samsung’s latest Galaxy Z Flip marketing is almost painfully transparent in which crowd it hopes to target. “Whether you’re an established influencer or someone who is simply sharing their life on social media,” the ad reads, “your mobile device needs to be able to keep up with your ideas and help you express yourself exactly the way you want.”

Samsung then sets out to show the many ways in which you can creatively use the Galaxy Z Flip to create content. The phone can stand on its own, thanks to the Hideaway Hinge — perfect for hands-free videos for TikTok or Instagram. The Quick Selfie feature lets you take selfies with the rear camera while the phone is closed. And you can quickly edit those selfies with the Flips’ image-editing software.

There’s nothing wrong with marketing the phone in this way; it’s just that it comes off as a little gimmicky in this format. You can take selfies on any phone, last we checked.

It is a creative phone! — If we were pressed to describe the Galaxy Z Flip in one word, “creative” would be a top contender. It’s one of the strangest phones on the market, and Samsung is using that flip design for creative applications. It is, for example, really cool that you can stand it up like a laptop while you’re filming.

The problem — and it’s one Samsung seems to be facing across the board with this phone — is that many of those “features” are things you can do with just about any smartphone. Phone stands are a dime a dozen and every smartphone has a selfie camera. So, $1,200 is a steep price to pay for… selfies.

If there’s any marketing gem to be found here, it’s at the very end, where Samsung calls the Galaxy Z Flip a fashionable accessory. That really is what makes the Flip stand out: it’s unlike anything else on the market. That shiny clamshell is sure to turn a few heads on your morning commute.