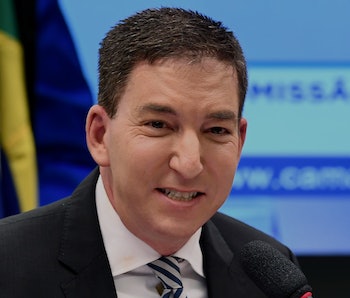 Rumble has quickly become a refuge for all manner of whackos, with the Canadian-based video platform recently seeing as many as 50 million unique visitors per month. As Gizmodo noted earlier today, such luminaries as Steve Bannon and Ben Shapiro currently pepper a stagnant stew of countless anti-vaxxers, QAnon cultists, and various other alt-right leeches... and Rumble is well aware of this fact.

But, instead of de-platforming these dangerous, radicalizing voices, the company has opted to recruit a number of not-as-bad notable names in an attempt to make it seem like Rumble is a true bastion of free speech and thoughtful discussion.

It’s not. But it does now have accounts from people like former House Representative and presidential primary candidate Tulsi Gabbard, as well as once-reputable-now-perpetually-persecuted-and-enraged-journalist Glenn Greenwald and a host of additional edgelords (or aspirant ones), “both-sides” satirists, and Joe Rogan wannabes.

In an official announcement, the company declared it was proud to recruit “prominent new voices [adding] to Rumble’s deep pool of content talent” for undisclosed sums of cash. This “deep pool” of “thought leaders” now includes various contrarian commentators, professional shitposters, and this person who calls herself “Bridget Phetasy.”

Doesn’t make up for the misinformation — “Although very diverse, this group of individuals does share one characteristic: a commitment to challenge the status quo, seek the truth, and share it. They also all believe that the internet should be free, and that tech monopolies should not dictate discourse,” reads Rumble’s statement.

Umm, sure thing Rumble, we believe you. Platitudes like “challenge the status quo” and “the internet should be free” are all good and well and true, not to mention the fact that tech monopolies do wield far too much cultural power... but this is all simply a Trojan horse to allow the worst philosophies to sneak into popular discourse.

Those peddling anti-vaccination arguments, radical conservative apologies, and QAnon lunacy love to champion supposedly “free discourse.” But there comes a point where we have heard “both sides” of an argument. And one side of that argument is demonstrably, dangerously wrong and doesn’t deserve airtime.

Rumble’s addition of a handful of moderate voices (and we’re stretching the term “moderate” pretty far here) does not improve the platform. If anything, it makes it significantly worse, because it shows how dedicated the people behind it are to trying to create a semblance of legitimacy for what is, ultimately, a toxic platform for falsehoods.