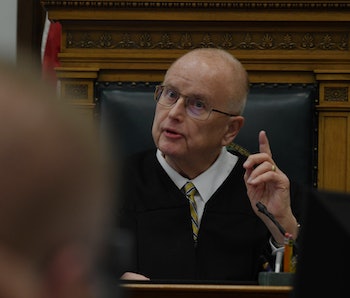 Kyle Rittenhouse, an 18-year-old man from Illinois, is currently in the midst of a trial for shooting three men during protests in Kenosha, two of whom died. At yesterday’s hearing, one of the main topics of conversation was the actual video evidence showing Rittenhouse’s alleged crimes. Rittenhouse’s lawyer brought forward a very strange defense of the footage: that, via Apple’s pinch-to-zoom recording feature, the video the jury was watching had been manipulated (h/t The Verge).

The internet watching the proceedings seemed to agree that the notion was laughable. We’ve been using digital zoom for ages, now. When has it ever changed the nature of a photo beyond simply… zooming?

But get this: The defense apparently sent no red flags up for Judge Bruce Schroeder. No, he follows the defense attorney down his baseless rabbit hole. And then the judge went so far as to say the prosecution must somehow prove that the ludicrous idea — which the defense presented with no evidence whatsoever — is false.

Excuse me? — Yes. As far as Judge Schroeder is concerned, there’s a very real possibility that zooming in on an image on an iPhone or iPad alters it significantly.

The pinch-to-zoom discussion begins after the jury watches a full-size video of the shooting. Rittenhouse’s lawyer suggests that the prosecutor might soon attempt to show the jury a more close-up view of the event. He takes it upon himself to warn the jury about the lies that view might tell.

Logarithms — The prosector’s response to this bizarre explication is clear and accurate. He explains that zooming in on a digital image is more like holding up a magnifying glass to a piece of paper than it is enhancing or extrapolating upon an existing image.

The judge is not convinced. He leans into the defense lawyer’s explanation, treating it as not only possible but plausible. He tells the prosecutor that he’ll have to find an expert to explain how the mechanism works if he wants to use the zoomed-in footage as evidence.

The prosecutor becomes flustered, at this point. (As did we, watching the footage back.) The judge requests this expert testimony at the behest of a person who believes algorithms are called logarithms. A person who repeats this word multiple times and never corrects himself.

Most of this misunderstanding can be chalked up to the judge’s own inability to understand technology, which he admits to during this conversation. In fact, he says he probably knows “less than anyone else in the room” about it.

We’ll have to wait and see whether the judge decides to let the zoomed video slide as evidence. Otherwise, who knows, we may be watching Tim Cook himself up on the stand next week.