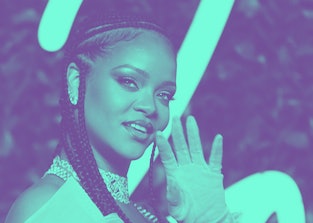 How many people the grant will cover each week for food and housing.

Rihanna continues to step up in the effort to help communities affected by COVID-19. The Clara Lionel Foundation, a nonprofit founded by the singer-songwriter-badgal, announced today a $4.2 million grant co-funded with Twitter CEO Jack Dorsey to help domestic violence victims in Los Angeles. “Stay at home” orders have left this group particularly vulnerable, potentially trapping many with their abusers or leaving them nowhere to go, and the funds aim to provide safe housing, meals, and counseling for individuals in need and their children.

The money will go to the Mayor's Fund for Los Angeles to cover roughly 90 people per week for 10 weeks.

Goodgal RiRi — Philanthropy is nothing new to Rihanna. The Fenty Beauty founder established the Clara Lionel Foundation in 2012 with a goal of helping marginalized communities through disaster preparedness and relief. And, she’s been pulling up to the COVID-19 fight for weeks.

In March, CLF teamed up with Jay-Z’s Shawn Carter Foundation to pledge $2 million toward aid for undocumented workers, frontline responders and their children, and incarcerated, elderly, and homeless populations. Rihanna was also notably among many people thanked by New York governor Andrew Cuomo, who revealed on Twitter that she donated personal protective equipment to the state’s dwindling supply. CLF also previously contributed $5 million to communities fighting the pandemic elsewhere in the U.S., the Caribbean, and Africa.

News of the latest grant comes just days after Jack Dorsey announced he’d be moving $1 billion of his Square stock to aid coronavirus relief efforts. The two have paired up on charitable initiatives in the past, CLF notes.

How exactly will this help? — Isolation measures around the world are necessary to “flatten the curve” of COVID-19 transmission but a nightmare for victims of domestic abuse. The grant hopes to cover those who need somewhere safe to go as shelters fill up.

Specifically, these funds will provide 10 weeks of support including shelter, meals and counseling for individuals and their children suffering from domestic violence at a time when shelters are full and incidents are on the rise. The Los Angeles Housing Authority has determined that approximately 90 people per week (in addition to their children, in many cases) have been turned away from domestic violence shelters in Los Angeles since the Safer at Home Order was issued. At approximately $125 per day, the grant will cover housing and food for 90 domestic violence victims per week, with an additional 90 victims every week thereafter for 10 weeks.

During a time many of us are feeling helpless and wondering what we can do to contribute, it's refreshing to see those who have the means to make an impact actually doing just that.