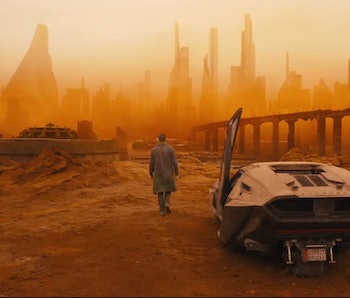 While making the press rounds for his upcoming film, House of Gucci, iconic director Sir Ridley Scott revealed that both Blade Runner and Alien live-action television series are in the early stages of development. Speaking to the BBC news radio series, Today, Scott explained that his team has already written an initial pilot script for the former show, which would most likely air as a 10-episode run.

Although the Alien series was first announced nearly a year ago as an FX on Hulu exclusive from showrunner Noah Hawley (Fargo and Legion), little has been heard of the project since then. Scott didn’t tell much, but confirmed that the Alien series is still “being written for pilot,” adding that Hawley and his crew “have to also write out the history, if it's eight hours or 10 hours, the bible of what happens in those 10 hours." A CGI anime set in the world of Agent K and Deckard in the year 2032, Blade Runner: Black Lotus, is currently airing on Adult Swim.

Still a lot of unknowns — Neither show has a release date or casting, but seeing as Hawley’s Alien is set to air with FX, it probably stands to reason that the Blade Runner continuation will likely be the same. Although very little is known about either story, Hawley confirmed last December that his show would most certainly not center on Sigourney Weaver’s character, Ripley (which is probably for the best — she’s been put through the xenomorphic ringer enough over the years).

“She’s one of the great characters of all time, and I think the story has been told pretty perfectly, and I don’t want to mess with it,” he told Vanity Fair last year, before confirming that his Alien story will also be set on Earth for a change. “The alien stories are always trapped... Trapped in a prison, trapped in a spaceship. I thought it would be interesting to open it up a little bit so that the stakes of 'What happens if you can’t contain it?' are more immediate."

We’re practically in Blade Runner anyway — While we’re skeptical about both projects, the prospect of a regular, sprawling story set in the worlds of Alien and Blade Runner (well, technically, the singular world) is certainly something we hope works out for the best. Hawley’s got a great track record already, and although Black Lotus responses have been somewhat mixed so far, Denis Villeneuve's Blade Runner 2049 somehow managed to establish itself as a major, epic sequel that gives its progenitor a run for its money. And, in any case, we’re already pretty much living in a (dumbed-down) Blade Runner dystopia as is, so we might as well have a show to match it.