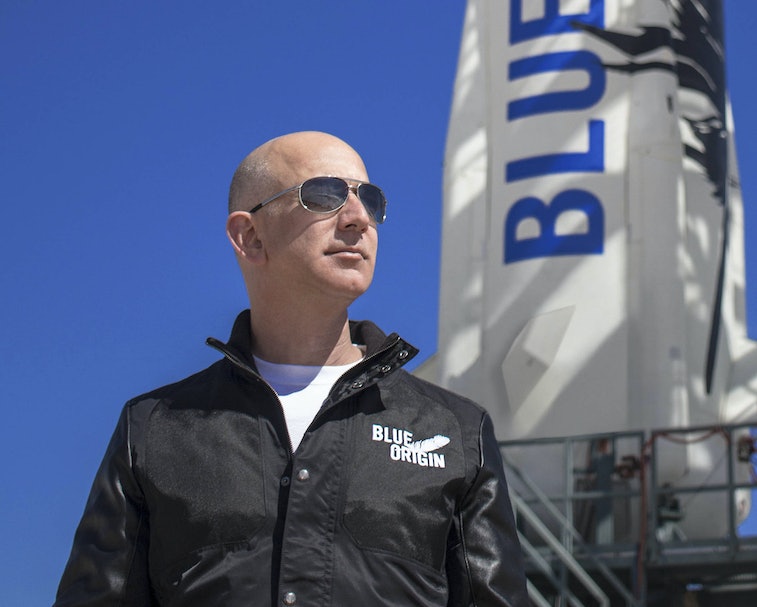 Buckle up, billionaires: Here’s your best chance yet to puke in zero-g next to Jeff Bezos later this summer! Earlier today, the Amazon CEO’s space tourism venture, Blue Origin, announced its first tentative public launch date for July 20, and with it comes a five-week auction for a seat aboard the company’s New Shepard rocket.

Per Reuters, the winner who outbids their fellow one-percenters will travel “more than 62 miles (100 km) above Earth into suborbital space, high enough to experience a few minutes of weightlessness and see the curvature of the planet before the pressurized capsule returns to earth under parachutes.”

While we won’t know how much it’ll end up costing whoever gets the extra spot aboard the craft until sometime around June 12, previous estimates have put Blue Origin ticket prices at around $200,000. Which, granted, for Bezos is pocket change, making it even more unsightly that he’s effectively getting a comp.

Billionaire dick-swinging contest — Although Bezos’ Blue Origin and Richard Branson’s Virgin Orbit have been working on their own space projects for years, it’s long been SpaceX’s game. Elon Musk’s rocket venture is far and away the most recognizable brand of the bunch, with its now near-constant work with NASA and its promises to give “Earth laws” the middle finger upon touching down on Mars.

The newly announced launch and auction, coupled with the Blue Origin’s own recent contract award from NASA, could give it a much-needed boost — both literally and figuratively — in its quest to compete with Musk’s Missiles (we keep emailing him suggesting that name instead of SpaceX, but to no avail).

More than one space contest on the horizon — Blue Origin isn’t the only company offering contests and auctions for jaunts to space: SpaceX is currently in the midst of its own search for lucky amateur astronauts for an upcoming lunar fly-by alongside Japanese billionaire, Yusaku Maezawa, that’s ambitiously (read: unrealistically) set for sometime in 2023. Previously, SpaceX also held a charity raffle for a spot aboard its first “all-civilian” Crew Dragon launch currently set for the end of this year.

As for the rest of us, we’ll have to watch the live streams on YouTube. As it stands, space travel is going to be largely restricted to either highly qualified individuals with years of training and preparation under their belts or the insufferably wealthy buying their way aboard flights. Average people will get tossed an auction or contest every so often, but make no mistake, outer space currently belongs to the uber-wealthy. Which always ends well.