“Adam was the sun and we all revolved around him.”

WeWork employee on the company's co-founder and ex-CEO 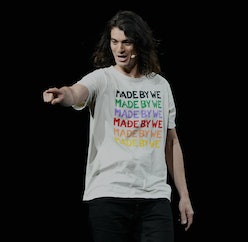 WeWork’s botched IPO and massive layoffs last year set the company up for indefinite public scrutiny. A new deep-dive from the Financial Times puts co-founder and ex-CEO Adam Neumann on full display — revealing the perfect picture of overconfidence. With a leader like this, it’s no wonder the company has fallen fast and hard.

WeWork ended up pulling its IPO last year after revealing enormous losses and raising less than it needed for a massive credit line. It’s becoming increasingly obvious that Adam Neumann’s personality played a pivotal part in WeWork’s downfall as well.

A God-like figure — The FT interviewed dozens of investors and employees of WeWork for its report and found an overwhelming number of comments linked to the conceited image of himself Neumann put on display for the company.

One employee said this was most exemplified when Neumann brought up his friendship with Jared Kushner, President Trump’s son-in-law, during negotiations with investor SoftBank.

A high-and-mighty downfall — This report makes it clear that Neumann’s arrogance had adverse consequences for WeWork’s future. According to the report, SoftBank’s CEO used Neumann’s conceited nature to his advantage by convincing him to expand WeWork more quickly than first planned.

Neumann took the bait and, as a result, WeWork fell from grace. Of course, other factors were also involved in WeWork’s issues last year — but the God-like figure Neumann wanted to be played part, too.