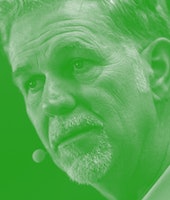 How much Netflix and its CEO have contributed recently to philanthropic initiatives.

Amid an ongoing pandemic and widespread protests against racial injustice, Netflix and its CEO Reed Hastings have made a slew of concrete moves demonstrating support for the communities hurting most. The latest announcement today is that Netflix will start putting 2 percent of its cash holdings (about $100 million currently) into Black-owned or led financial institutions, where the capital can be used to invest in entrepreneurs of color.

It's not hard to do good — To be clear, Netflix isn't donating 2 percent of its cash reserves — rather it's parking that money in Black-owned financial institutions, where it will still be able to withdraw the funds as it wishes. But the deposits help these banks because they will be able to issue more loans in underserved communities than they otherwise could have due to capital requirements. Banks are required to keep a certain amount of money in their reserves to prevent themselves from running out of cash if too many customers try to withdraw at once. Black-owned banks tend to have much less access to capital than major national banks.

Today's announcements come shortly after Hastings committed $120 million of his own money to institutions dedicated to the higher education of students of color. To support coronavirus relief efforts, Netflix recently created a $150 million coronavirus relief fund to help the production crews that normally make its entertainment content but are currently out of work as productions are paused.

Earlier today Netflix also said that it has hired Bozoma Saint John to serve as its new chief marketing officer.

No more empty words — All told, Netflix and Hastings have turned words into action with these moves. The public is tired of companies virtue signaling by simply releasing statements of solidarity on social media. We want real action that will last beyond the protests or the shutdowns, that demonstrates companies really care about the communities that have supported their growth. Netflix's hiring of Saint John, and its allocation to Black financial institutions, are exactly that. Placing money in Black financial institutions is a small but thoughtful move that will benefit Black entrepreneurs for years to come, and one that really doesn't even cost Netflix very much. It might earn less interest on its deposits but it'll surely make a lot of customers more loyal in the process.

Meanwhile, Facebook CEO Mark Zuckerberg recently donated... $10 million to fighting racial justice following the murder of George Floyd, and $25 million to COVID-19 research. And this is all while he steadfastly refuses to take down or censor Trump's posts threatening Black Lives Matter protesters. For context, Zuckerberg's donations here amount to maybe 0.03 percent of his net worth of $81 billion. Hastings is worth a measly $4.7 billion in comparison. Another CEO who's proportionally donated a lot more than Zuckerberg is Twitter's Jack Dorsey, who recently committed a third of his wealth to COVID-19 relief and other initiatives — $87 million of which has already been received by a range of non-profits.

The ironic thing is that Hastings used to be on the board of Facebook but resigned because he wasn't the 'yes man' that Zuckerberg wanted. Hard to blame him.