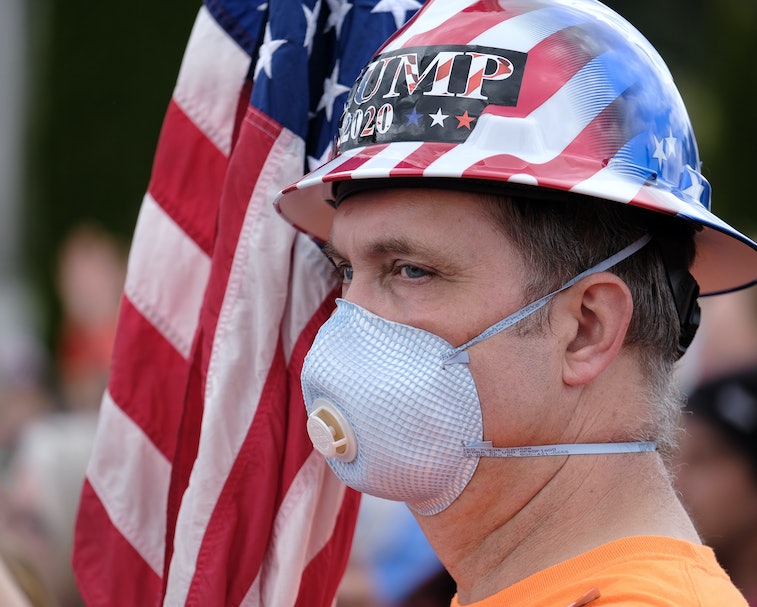 An enormous number of anti-quarantine protest websites have been registered by the same unknown third party out of Florida, despite claiming to be individual grassroots movements, Redditor Dr_Midnight has discovered. The websites all follow the same naming scheme — reopenmn.com, reopenpa.com, reopenmd.com, etc. — and are linked by many social media groups claiming to organize action against what’s being called “excessive quarantine” measures.

Using some basic investigation skills, Dr_Midnight uncovered the fact that all of these websites were registered at the same time from the same location. A quick click on many of these links leads to gun rights websites, all with very similar layouts and information. Hundreds of thousands of Facebook users are joining Facebook pages that claim to be organizing movements working to end COVID-19 quarantine measures, but they all link back to gun rights advocates.

Though their identity is still unclear, it’s obvious that one party is behind this astroturfing campaign. It’s a dangerous case of misinformation — and one that Facebook plays a pivotal role in.

Facebook is at the core — Misleading websites are one thing; their proliferation through social media is another entirely. Social media has the power to spread information with reckless abandon, which all too often proves to be its downfall.

In this case, the spread of misinformation is focused in a set of Facebook groups. The groups are all private, which means users must join before viewing their contents. Each is named for an individual state: “Reopen Minnesota” and “Pennsylvanians Against Excessive Quarantine,” for example. These groups all utilize very similar language in their descriptions.

At the time of this writing, these two groups alone had a combined membership of nearly 100,000 people. That’s less than a week after the pages were started.

Astroturfing, plain and simple — Grassroots movements are beloved by many because they are a form of local collective action that seeks to make large-scale, meaningful change. Astroturfing essentially takes this concept and utilizes it as a marketing ploy. An astroturfing campaign claims to be grassroots while really being backed by a powerful individual or group.

Whoever is organizing this particular astroturfing campaign hasn’t even taken steps to cover their tracks. The “re-open x state” domains all link back to gun rights pages, and each domain was registered by the same user in Florida. Other Redditors have found that the user’s Google Analytics account has been linked to a number of other gun rights websites, too.

These Facebook groups all take on the guise of grassroots movements to encourage new members to join. And it’s working.

It’s time for Facebook to step in — This Reddit thread makes it clear that these supposed grassroots campaigns have been organized by the same third party. An investigation by The Washington Post points to the Dorr brothers, known gun rights advocates, as the creators of the astroturfing campaign.

But the identity of those behind the movement is less important than its implications. The World Health Organization, the Centers for Disease Control, and the federal government have all agreed at this point that measures of self-isolation and social distancing are the best way to fight against COVID-19, but these groups are organizing people directly against that guidance.

And Facebook is making it effortless to do so. A few simple clicks is all it takes to start up a Facebook group; a few more and it’s shared by a network of similar-minded users. Soon you have thousands and thousands of people protesting measures meant to save lives.

According to The Washington Post, Facebook says it hasn’t removed the groups because they don’t violate any laws. That goes directly against the company’s supposed hard stance against COVID-19 misinformation being spread on the platform.

Facebook’s response to COVID-19 has been mixed thus far; it’s added a dedicated information center to the News Feed and invested in local journalism, but it’s also accidentally blocked legitimate coronavirus news and allowed ads with false COVID-19 cures to slip through its moderation protocols.

It may be true that these groups don’t violate Facebook’s policies — and, if so, that means its policies are nowhere near comprehensive enough. The platform is making it very easy for one gun rights group to organize hundreds of thousands of people against the very measures helping us put an end to COVID-19. If Facebook doesn’t step up and ban this kind of astroturfing nonsense soon, the problem is sure to only worsen.

But go ahead, send a virtual hug — maybe that will help.