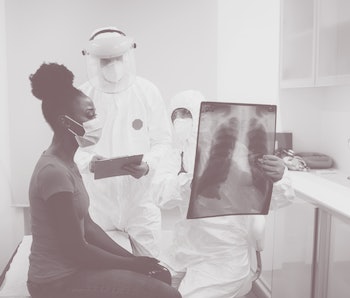 It’s a well-worn fact, at this point, that algorithms often inherit the biases of the societies they were produced in. Ranging from the obviously problematic, like crime-prediction algorithms, to the mundane but still horrifying, such as Twitter’s cropping algorithm, there’s really no algorithm that’s safe from our human tendencies.

This problem is made about a million times worse when the algorithm in question is created for healthcare purposes. Take, for example, algorithms used to decide which patients receive priority for organ transplants. With way more applicants than available organs, it’s complex algorithms that are often left to make life-saving decisions — and those algorithms are biased.

Take, for example, this study of kidney transplant hopefuls in the Boston area, which Wired highlighted in a recent report. The study found that more than a third of all Black patients on the transplant list would have been placed into a more severe category of kidney disease if they’d been estimated using the same formula as for white people. That’s more than 700 people that could have received better care if the system’s algorithms hadn’t been racially biased.

We’re slowly but surely reckoning with the unintended side effects of the power we’ve given artificial intelligence in controlling our lives. Hopefully we can learn from these studies and mitigate harm before history repeats itself.

Mortal consequences — Given that algorithms can be boiled down to lines of code on a screen, it’s difficult at times to recognize their far-reaching effects. In the case of healthcare algorithms, these effects can literally be the difference between life and death.

In this particular study, researchers found that 64 Black patients’ recalculated scores — if based on the algorithm used for white patients — would have qualified them for a spot on a kidney transplant waitlist. None of those patients had been evaluated for a transplant or even referred for an evaluation. Not a single one.

Change is coming, hopefully — If there’s any good news to share here at all, it’s that studies like this one are putting algorithms’ biases in the spotlight.

Wired points out that even federal lawmakers are considering the issue; Rep. Richard Neal (D-Mass.) is advocating for algorithm change in the medical industry, for example. “Many clinical algorithms can result in delayed or inaccurate diagnoses for Black and Latinx patients, leading to lower quality care and worse health outcomes,” he stated.

Senator Elizabeth Warren, among others, has also called for the Department of Health and Human Services to investigate race-based medical algorithms.

White people are already apt to receive better medical care based on underlying socioeconomic factors — and algorithms are making that problem much worse. Even those formulas created with the best of intentions have the potential to inflict real-world harm.