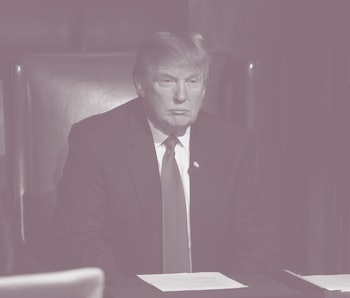 Truth Social, the alternative social media platform created by Donald Trump, is rolling out the red carpet for QAnon conspiracy theorists. Media watchdog NewsGuard has found 88 accounts promoting QAnon content to more than 10,000 followers each — some of which have been granted verified badges. More than one-third of the accounts had been banned from Twitter in the past.

NewsGuard’s latest Misinformation Monitor report focuses heavily on Truth Social’s allowance of QAnon-related misinformation. Trump, who has amassed nearly 4 million followers on Truth Social, has “reTruthed” posts from 30 of these QAnon accounts since joining the platform in April.

QAnon material has been banned from just about every major social media platform at this point, making Truth Social its perfect home by process of elimination. The same goes for Trump, who hasn’t been allowed to post on Facebook, Instagram, or Twitter since January 2020. Truth Social’s crowd is exactly the kind of users who are down to read some juicy QAnon theories on the regular, making it all the more important for the platform to moderate itself.

Just fully thriving — Trump’s warm interactions with QAnon supporters aren’t a new phenomenon; he used to retweet QAnon accounts all the time when he had access to a Twitter account. The difference here is that Truth Social isn’t doing anything to quell QAnon misinformation, and the legions of journalists and fact-checkers present on Twitter are not watching this go down on Truth Social.

It’s not just Trump that’s normalizing QAnon content on Truth Social, either. Both current and former Truth Social executives have shared QAnon messages and graphics on the platform. Patrick Orlando, CEO of the SPAC that bankrolled Truth Social’s creation, has reTruthed graphics with QAnon’s “where we go one we go all” rallying cry, for example.

A representative for Orlando told The New York Times: “Mr. Orlando does not follow or pay attention to QAnon. And he has no idea what constitutes so-called ‘common QAnon catchphrases.’”

Not enough to keep it afloat — It’s clear from the attitudes of those running Truth Social that content like QAnon conspiracies is not just unproblematic to the platform — it’s fully welcome there. More than half the accounts flagged by NewsGuard have been granted verification badges. A company representative sent The New York Times a statement saying Truth Social has “reopened the internet and given the American people their voice back.”

This ethos, meant to attract those internet users tired of being “censored” by mainstream social media platforms, has not been enough to make Truth Social a success. Sources familiar with the site’s finances — as reported by Fox Business — say the company owes hosting company RightForge about $1.6 million.