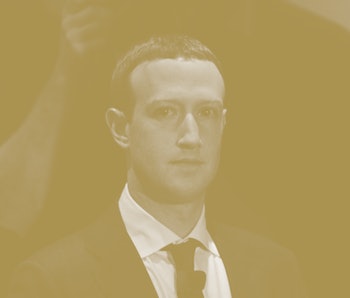 Six civil rights groups including the NAACP and the Anti-Defamation League have started a campaign calling for advertisers to stop supporting Facebook through ad endeavors, the groups announced Wednesday. The boycott is in protest of what the groups call Facebook’s “repeated failure to meaningfully address the vast proliferation of hate on its platforms.”

The action proposed by the Stop Hate For Profit campaign is simple: pull your ads from all Facebook companies for the month of July. The campaign took out a full-page ad in The Los Angeles Times this week to wonder how much good Facebook could do with the $70 billion it makes in advertising revenue each year.

“Let’s send Facebook a powerful message,” the ad concludes. “Your profits will never be worth promoting hate, bigotry, racism, antisemitism and violence. Please join us.”

At this point, Facebook doesn’t even really make an attempt to hide its allowance for the hate and lies spreading across its platforms. Even so, there’s tons of money to be made in the company’s advertising structure. In a somewhat unprecedented move, the company pulled a series of ads from President Trump's re-election campaign on Thursday because they contained blatant Nazi imagery. But Facebook has otherwise remained soft on hate speech and, in some cases, incitements of violence.

Activist movements against the company’s allowances for hate are more common than ever. Public pressure for Facebook to change its ways — especially when co-signed by notable activism groups — is always welcome.

Facebook is full of hate — The Stop Hate For Profit campaign is right: hate speech and misinformation have become staples of Facebook’s brand. That’s largely because Facebook continues to push a narrative of neutrality, in direct opposition to other social networks like Twitter that take a more aggressive approach to fact-checking and policy enforcement.

This laissez-faire attitude was recently exemplified when Facebook allowed President Trump’s “looting and shooting” post to stay up even after Twitter had taken a stand against it for inciting violence. CEO Mark Zuckerberg defended the decision tooth and nail.

This has direct consequences for Facebook. Hate groups flock there more quickly than Facebook can take them down; misinformation campaigns run amok; politicians are allowed to run ads directly calling to shoot protestors despite violating the platform’s policies.

Facebook needs to take action — Facebook makes truly wild amounts of money through its ad infrastructure. Mark Zuckerberg and company don’t want to threaten those profits by making anyone feel alienated. Money taken from hateful politicians is still money, after all. Through all of this drama, Facebook continues to push a narrative that it’s a welcoming, safe space for everyone. If you don’t like the hate, well, you can just hide it from your feed.

“Facebook has refused to stop prioritizing profits over the well-being of our society,” said James P. Steyer, founder of activist group Common Sense, in the campaign announcement, “but advertisers can, which is why we are urging companies to take a pause from spending on Facebook ads until it makes common-sense changes on the platform that protect our children, our democracy, and social justice in this country.”

Whether or not Facebook even pays attention to this campaign remains to be seen; Zuckerberg could easily just swat it like a pesky fly if it doesn’t gain much traction amongst advertisers. No matter the outcome, it’s promising to see prominent activist groups using their platforms to speak up about Facebook’s continued problems.