Pro Music Rights — an organization that represents musicians and labels in collection of payment for their work — wants proper representation and compensation for its artists. In a press release, Pro Music Rights announced it was suing Google, Apple, and others for copyright infringement, alleging the tech giants used unlicensed work by its various musicians (including A$AP Rocky, Wiz Khalifa, Pharrell, Young Jeezy, and many others). The company is asking for compensation of $150,000 "for each act of willful infringement." Considering PMR represents about 2 million copyrighted works, this could get very expensive, very fast.

The company also named YouTube, Amazon, SoundCloud, Pandora, Deezer, 7digital, iHeartradio, and Rhapsody in its case filed in the United States District Court for the Southern District of New York. The company claims that, "Music streaming services have repeatedly refused to take or honor a license. Instead, they have continued to perform the copyrighted musical works of Pro Music Rights songwriter, composer and music publisher members for the entertainment of their listeners without obtaining permission to do so."

A lot of ground to cover — The company's CEO Jake P. Noch officially stated, "Each of the music streaming services sued has made a business decision to use music without compensating songwriters. By filing these actions, Pro Music Rights is standing up for songwriters whose creative works bring great value to all streaming services who publicly perform their music. Pro Music Rights will not give up the fight, no matter how long it wages."

The company further stated that "streaming services using copyrighted music have the opportunity to obtain permission to do so lawfully through a simple license, which covers the entire Pro Music Rights repertory."

The charges — Here are a few of the claims the company makes in its filing against Google (other filings are similar in nature):

Google has streamed Repertoire hundreds of thousands of times without ever entering into a license agreement with Plaintiff for payment of public performance royalties and/or monetarily compensating Plaintiff for such exploitation.

Google did not report to Plaintiff the use and exploitation of it music because Google was earning (and continues to) financially benefit from its infringing conduct.

During the course of Defendant’s exploitation, Google had knowledge and was also made aware of the Copyright Act with which it was obligated to comply.

Despite PMR’s persistent efforts, Google failed to enter into a license agreement with Plaintiff.

The company filed a similar claim against Spotify in November of 2019.

Minding the shop — YouTube and other companies have been swift with DMCA checks to keep labels and songwriters happy — sometimes to the aggravation of their users. Streaming companies and record labels tend to work in unison to differentiate between fair uploads and pirated content, but there's no way to be certain that all of the work uploaded (particularly in open systems) has passed the checks and balances.

Additionally (and perhaps most importantly), it's hard to say if Pro Music Rights can prove its case against Google, Apple, Spotify, and others, since the very nature of streaming platforms allow for wiggle room in which to distance the host from the hosted content. However, if what PMR alleges is actually happening, some of the biggest companies in the world have been willfully profiting from mass copyright infringement. Let's see what the courts have to say.

Read the full Google complaint below: 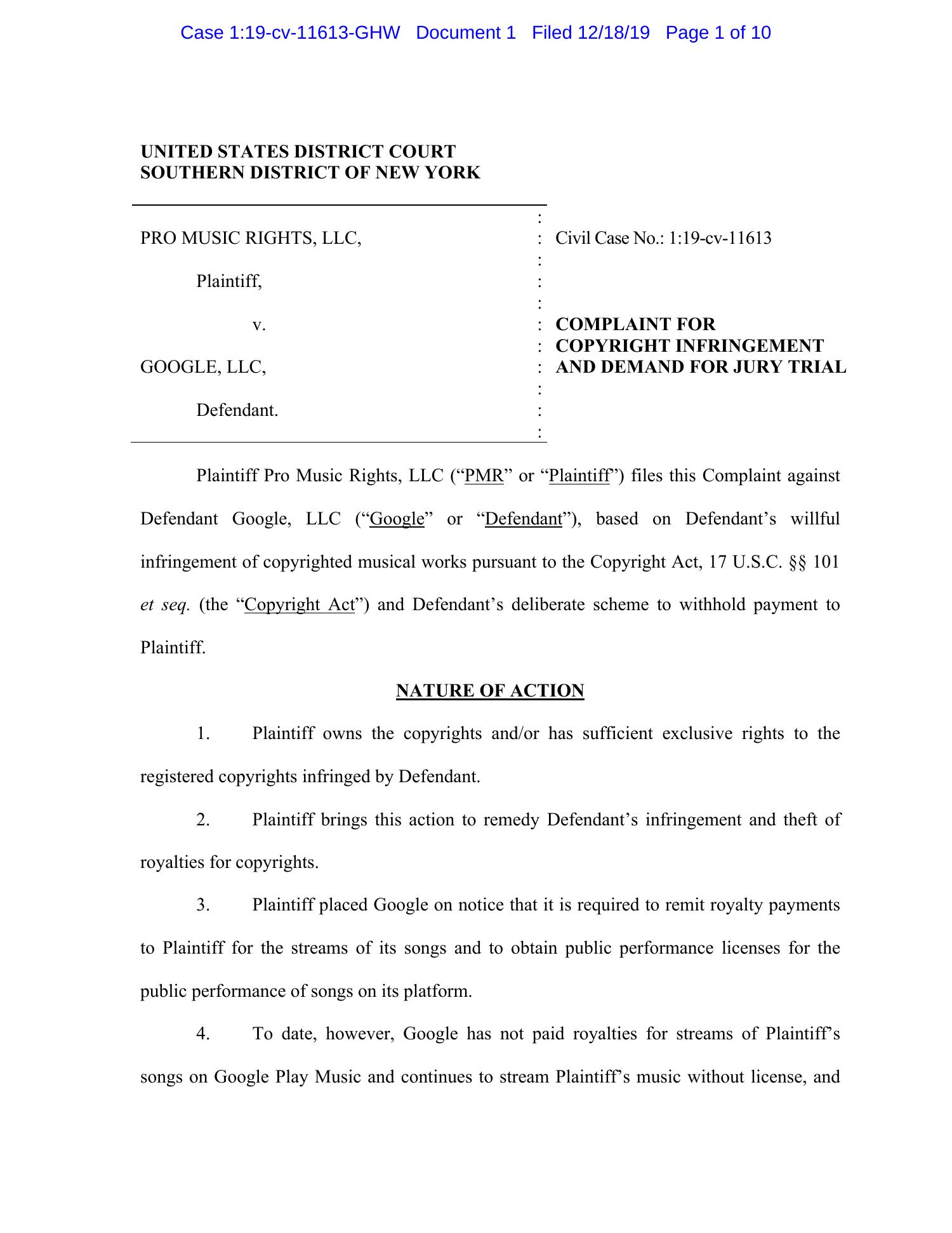