“We must hold social media platforms accountable for the national experiment they’re conducting on our children for profit.” 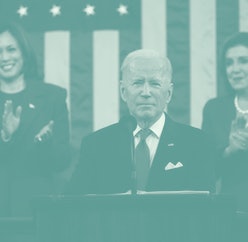 Increased Big Tech oversight is one of the few remaining areas that seems to draw at least some bipartisan support, for a number of reasons. The “Someone Please Think of the Children!” refrain is always an easy cause to get behind for politicians — and, in this case, it’s more than likely warranted. One of Biden’s SOTU special invites last night was former Facebook employee, Frances Haugen, who made headlines late last year thanks to her congressional testimony on the many, many issues within the company, including its propensity to downplay internal studies showing its products exacerbated teens’ mental health struggles.

Regulation and funding — In addition to the proposed measures to better regulate Big Tech, Biden also explained his intention to earmark approximately $5 million of the nation’s 2023 budget to funding research into social media’s mental health harms, as well as potential solutions to the problem. The President also indicated he will direct the Department of Health and Human Services this year to establish a national Center of Excellence on Social Media and Mental Wellness to “develop and disseminate information, guidance, and training on the full impact of adolescent social media use, especially the risks these services pose to their mental health,” according to a new fact sheet released by the White House.