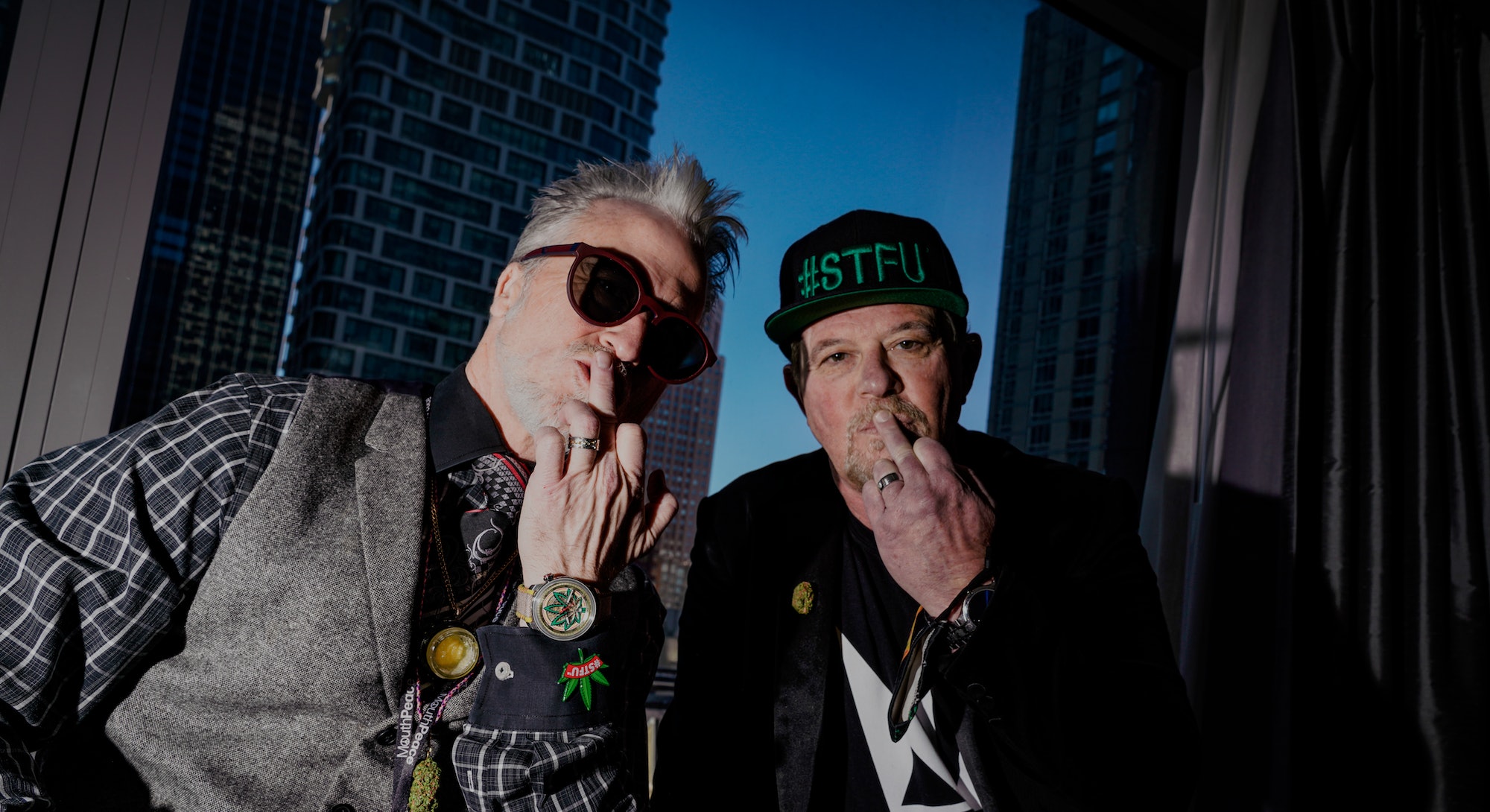 Entering New York’s CannaCon with the Pot Brothers at Law is like stepping onto the Oscars red carpet with Meryl Streep.

It’s early January, and the Orange County, Calif. brothers, Craig and Marc Wasserman — both decked out in sparkly marijuana nug pendants and face masks sporting their weed leaf and gavel logo — are recognized everywhere they go on the otherwise drab convention floor at the Javits Center.

But before the Pot Brothers will grant fans a photo, they make them answer their favorite question: “What do you do when you get pulled over by the cops?”

Marc, a former working actor and the showman of the brothers, asks this of a selfie-seeking guy in a hoodie named Tristan.

“Oh, hell yeah!” Tristan exclaims, thrilled at the chance to utter the brothers’ catchphrase in their presence. Still, perhaps because of nerves, he has to think about it for a second: “Uhh… Shut the fuck up!”

“That’s it! That’s the ticket,” Marc says. The photo of the trio snapped, the brothers move on to the booth for seed-sellers United Strains of America, where 24-year-old employee Ayman Dandashi gushes that he’s been watching the Wassermans on Instagram “since I was in grade school.” Marc laughs.

“Old guys smoking weed, telling everyone to ‘Shut the fuck up’ — that’s where they got my attention,” Dandashi tells me.

Per their website, which (inconsistently) plays Bob Marley’s “Three Little Birds” on loop, the Pot Brothers have got you covered whether you’re aiming to start a legal cannabis business in California — they help with licensing, regulatory compliance, and local permits — or you’re in trouble with the law for a weed-related offense there. Since they’re only licensed to practice in California, they’ve grown what they call a “worldwide attorney referral network system” to suggest trusted cannabis lawyers outside their home state.

Sporting sunglasses and inhaling fat joints, the brothers dole out free legal advice online, often from the parking lot outside their office. (They used to shoot in the car until their friend Dr. Dina, the inspiration for Mary-Louise Parker’s character on Weeds, told them that set a bad example.) Since 2015, they’ve been posting “15-Second Tip of the Day” videos to Instagram, where they have nearly half a million followers.

The brothers also co-host the Cannabis Talk 101 podcast, billed as the “ESPN, CNN, FOX News, and The View of Cannabis,” whose guests have included right-wing political operative Roger Stone. (They’d absolutely be Stone’s lawyer, if asked. “We would tell him to shut the fuck up!” Marc says). They’ve been featured widely in the media, including an appearance on Comedy Central’s Tosh.0.

Anybody who’s anybody in the cannabis industry knows them, including street dealers here in New York. Some dealers who follow the Wassermans on social media took them “literally to the hood” the day before, says Craig. The guys in the “hood” kept their cool while the brothers were around, but later one of them revealed to Marc that the locals “went crazy that you were there.”

Thanks to Omicron, this year’s New York CannaCon feels empty — there are somewhere around 2,000 attendees at a conference that should have attracted three times as many.

It’s also a blander affair than you might expect, given that this is a conference dedicated to weed (which was legalized in New York State last year). There are talks with names like “Navigating HR, Compliance and Payroll in a New Decade” and “Modern Website Musts to Establish Credibility With Customers & Compete Online.”

Naturally, the Pot Brother’s seminar, titled “The Etiquette of Engaging Law Enforcement: How to Shut the F&*# Up,” stands out — and attracts a standing-room only audience. While the Wassermans don’t look related — Marc with his silver hair and aquiline nose, Craig with his brown hair and bulldog’s expression — they certainly play-bicker like brothers for the crowd.

Up on stage, Marc, wearing custom sneakers featuring his and Craig’s faces, immediately pokes fun at his older brother: “[He’ll] tell you how he got into law… way back when, in the ’30s.”

“They refer to it now as the mid-1900s,” Craig shoots back, before saying that really he’s been practicing law since 1986, about a decade before Marc started. (Marc, whose lengthy IMDb page includes acting credits in The Wonder Years and Showgirls 2, originally began practicing law to finance his film career.)

But Marc got into criminal law first. The pair initially teamed up to help Craig’s son Jerett, now 32, when he got arrested on felony counts of cultivation and intent to sell for growing cannabis in the mid-aughts.

“I think it’s important you tell people that when he was 14, 15 you suggested he use cannabis,” Marc tells Craig onstage, “instead of other medication that doctors wanted him to —”

“That’s true,” Craig cuts in. “They wanted him to take all kinds of medication — we were going through a rough patch — and instead I showed him cannabis, and cannabis worked for him.”

Today, Jerett sells cannabis products legally through his California-based brand West Coast Cure. But at the time of his arrest, the legal attitude toward marijuana in California was “felony first,” Craig says. The lawyers Craig hired to defend his son (coincidentally another pair of brothers) didn’t cut it. So the Wasserman siblings, who had no experience in cannabis law at the time, fired those attorneys and ultimately got Jerett’s case dismissed.

Though the Wassermans’ #STFU plan may sound like a solid way out of trouble for white audience members, plenty of the people watching their seminar are Black. “We get a lot of pushback from minorities and people of color,” Marc tells the crowd. He admits to their advice’s limitations: It’s not for preventing racial profiling or police brutality. It’s just a tool, he says, to “help decrease the chances that those things are going to happen.”

Then comes the audience participation part of the seminar. The brothers are offering one lucky contestant the chance to win $100 for correctly executing their 25-word script for conversing with law enforcement. A 27-year-old Black woman with long braids who goes by Sphinx takes the stage, and Marc attempts to throw her off while he plays the cop.

“What are you doing in this neighborhood? Where did you get these braids?”

“Why did you pull me over?” she responds coolly, successfully completing the first line of the script.

“Because I don’t like the way you’re driving,” Marc says, raising his voice. “Are you going to a drug deal?”

She gets line two right — “I’m not discussing my day” — and nails the follow-up: “Am I being detained, or am I free to go?” (She’s being detained, Marc says.) “I invoke the Fifth,” she concludes.

“Then what are you gonna do?” Marc asks, breaking character.

“Shut the fuck up!” she replies. The audience laughs and bursts into thunderous applause.

Showmanship and flashy weed accessories aside, the Wassermans are first and foremost cannabis activists, pushing to end prohibition. “They work so hard behind the scenes,” says Amanda, “and treat their clients like family.”

That doesn’t prevent the occasional one-star Google review. As one commenter wrote, “They were way too high to function as lawyers.” When I read this back to them at their hotel earlier that morning, the Wassermans laugh.

“That was probably another lawyer,” Craig says. Since gaining social media clout, Craig’s had to learn to “deal with haters,” says Marc. It’s true, however, that the brothers work stoned — every day, in fact, they tell me.

“What I love about this trip is that I have seen every type of cannabis business.”

“I don’t normally do it before I go into court,” Craig says. Though one time, he recalls, he and the opposing attorney got into such a heated battle that he needed to take a few hits during lunch to chill out. “I got a great result,” he says.

After the seminar, Marc — whose wife is at home in California with their three kids — tries to convince his brother to hang out more, dangling the prospect of running into Martha Stewart later at the Astor Club, a members-only cannabis establishment in the Lower East Side neighborhood. He’d been the night before and heard whispers of her potential visit.

Craig decides to go back to the hotel with his wife, which is just as well. When we leave the Javits Center, the Astor Club’s bearded owner catches Marc outside and tells him that Stewart actually can’t stand being around weed: “The whole Snoop Dogg thing is bullshit.”

One thing I learn while hanging out with Marc that evening is that he seems to have an unlimited appetite for THC. A few hours after CannaCon, we stop at Street Lawyer Services, a “cannabis lifestyle brand” that recently opened shop in the Lower East Side, where he records a video interview with the shop’s co-owner, a young woman who goes by Yana Tokes, while consuming at least two full packages of THC edibles.

This doesn’t dampen Marc’s energy. Afterward, a man Marc insists I refer to as “Mr. L” drives us to a spray-painted basement in Corona, Queens, where Marc takes a number of hits from a spectacular two-ounce joint. (It’s about the size of a large kosher dill pickle.) I hear him cough for the first time all day. Meanwhile, the joint’s creators, who are circled around him, whoop and marvel at his ability to inhale.

In all, the Pot Brothers have had an eventful few days in New York. “What I love about this trip is that I have seen every type of cannabis business — from in front of a fire hydrant to Street Lawyer Services, and everything in between,” Marc muses at one point in the evening.

But he hasn’t strayed far from the brothers’ roots in the business. On our way back to Manhattan, Marc gets a call from his nephew Jerett, whose friend — who is Black — got pulled over by the cops.

According to Jerett, the police smelled cannabis and used that as an excuse to search the friend’s car. However, as Marc points out, this does not count as probable cause for a search in California.

Marc lets Jerett know that he’s “got him” and that they’ll talk Monday morning. He’s pretty confident he’ll win the case: “When people are referred, particularly from my nephew, chances are they know to shut the fuck up.”