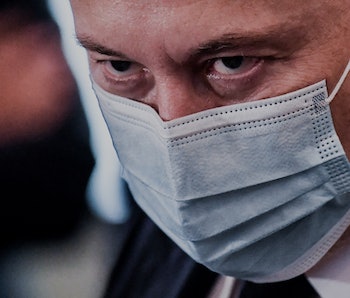 Contrary to pretty much everything he says and does, Elon Musk doesn’t enjoy being the ruling billionaire Technoking of a terrible scam empire at all. “I rather hate it,” he said, and would much rather be spending his time “on design and engineering” instead of instigating flagrant market manipulation and nepotistic business dealings. At least, this is what he said in court this week while testifying in a trial accusing him essentially of flagrant market manipulation through nepotistic business dealings.

To be more specific, Musk is getting grilled in a Delaware court over Tesla’s $2.6 billion, 2016 acquisition of solar panel maker, SolarCity, a company that has never generated a profit. Prosecutors allege Musk was well aware of SolarCity’s woes but pressured his reticent board members into going along with the deal anyway, in part because of Musk’s 22 percent stake in the company... Oh, did we mention SolarCity was founded by the Technoking’s cousins? Because SolarCity was founded by the Technoking’s cousins.

So sad, Elon. Hey, at least you have that $250,000 trip to space next to fellow Billionaire Boyz Club member and sentient set of veneers, Richard Branson, coming up.

How are people still doing business with this guy? — Musk’s latest legal woes (which will potentially cost him $2.6 billion, by the way) should be yet another sign that the man is a techno-huckster with an eye for PR stunts, and not much more.

Instead, unfortunately, entire cities are still buying into his grifts — most recently Fort Lauderdale, which is considering building a Boring Company tunnel venture that would connect its downtown to the nearby beaches. This bid comes after the hilariously underperforming tunnel that opened up for the public in Las Vegas last month. Instead of the 600mph levitating magnet-trains we were promised years ago, commuters can find themselves in a self-driving Tesla traveling through a claustrophobic underground loop at barely 35mph. So, y’know, a slight adjustment of expectations.

And yet, we erect monuments — Despite all this, people are legitimately just straight-up building golden idols to the billionaire Ayn Rand fanboy. Even if Musk loses the case in Delaware, an outcome as deserved as it is unlikely, his fines will be a drop in the bucket for the man. It’s going to take a lot more than slaps on the wrist and theatrically contrite courtroom statements to rein him in.