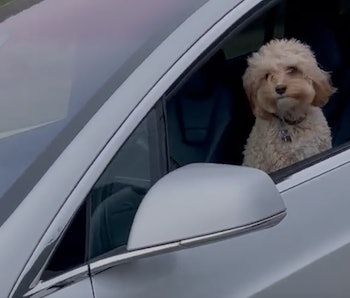 Tesla’s Full Self-Driving Mode Beta is very, very [Editor’s Note: VERY] bad. In all honesty and without a trace of over-exaggeration, nobody should be using it right now unless they are on a closed roadway. Unfortunately, the people who won’t heed our (and the Technoking’s own) warnings are also those who pull monstrously stupid stunts like, say, sticking an unaware dog behind the wheel of their Tesla, setting it to autopilot, then filming the “LOLZ” for TikTok likes. That’s what the fine folks at Electrek recently uncovered, who then managed to contact the person responsible for uploading the video.

As Electrek explains, they’re also likely the people responsible for the entire stunt itself, which violates all sorts of ethical and legal rules. Seriously, this shit can’t be tolerated for so many reasons. But Tesla Bros are gonna Tesla Bro, right?

Social media influencers strike again — The original video was apparently uploaded by Blake Messick, a TikTok and YouTube personality with a sizable following who has made a name for himself via your run-of-the-mill viral prank videos. When contacted by Electrek, Messick claimed he merely “saw” the dog behind the Tesla’s wheel while out driving with his friend.

“Never in the video nor in my conversation with Messick did he express any concern for the dog or for anyone on the road. Instead, he talked about the views it was getting on social media,” Electrek reporter Fred Lambert explained. Messick then surmised that maybe one of his friends was behind the prank. Uh-huh.

Needs to be held accountable — Whoever is actually responsible for the reckless video (hint hint) genuinely should be held accountable. The video appears to depict a Silver Metallic 2017 Tesla Model X with the license plate number PWS-0806. Already the clip has been flagged on TikTok with a message reading “The action in this video could result in serious injury.” It’s probably worth noting here that a lot of videos posted to Messick’s account feature the same warning, as well, so there’s that.

Tesla’s autopilot debacle is bad enough as it is already; there is really no reason to bring dogs into the fray. It just goes to further show that the only people truly utilizing Tesla’s FSD Mode are the absolute last ones we’re comfortable with handling the technology.