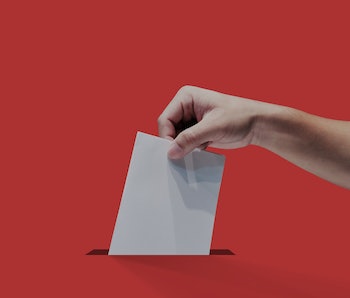 Pinterest has announced a set of regulations, new and previously existing, explaining how it will handle content pertaining to the 2020 presidential election on its platform. It is a delightfully proactive approach coming from the website that previously helped users fight COVID-19 blues. Perhaps Facebook should take note.

The company plans to demonetize pages that lead to election-relevant content. In doing so, it will be removing the presence of ads for such results. Pinterest also says that it won't allow aspiring candidates to run their political campaign ads on its website. It's a decidedly bold approach compared to Facebook, which has announced a last-minute strategy for political ads.

Plus, Pinterest will offer eight hours of paid time — which is technically a full workday — for its employees to either go vote or help out as a poll worker. It's among several efforts the internet's sprawling pinboard is making to ensure its platform, unlike Twitter and Facebook, doesn't become an unwitting tool for political instability.

On the flip side, Facebook has said that it will run political advertising — which is frequently misleading and polarizing — until the week leading up to the American election. Of course, critics have slammed the policy as it still gives bad actors and trolls ample time to manipulate public debate.

Grab some resources — Unsure what the term "absentee ballot" is? Wondering how to check your registration status? Pinterest will help users access reliable resources on the nonpartisan Vote.org to get answers for these questions.

Turning inward — Pinterest's move to focus on its internal team — in addition to providing clear language around elections, politics, and transparency — should encourage other companies to exercise the same kind of openness.

The tech sector has amassed a notorious reputation for outward signalling and making grand claims. But by letting the world know its own workforce will take paid time off to engage in their civic duties, Pinterest is giving everyone a refreshing and necessary standard to follow.

"We believe participating in the democratic process can be inspiring," the company says, "and we want Pinterest to be a place where people can find credible information that inspires them to participate fully in their communities."