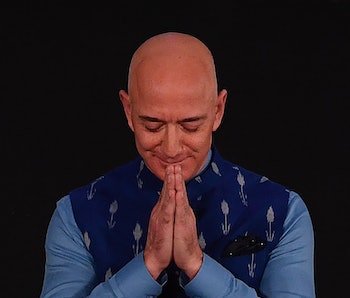 Elon Musk, for all his faults (and we do mean all of them), beautifully summed up Jeff Bezos’s ongoing temper tantrum against NASA for jilting Blue Origin’s lunar lander proposal. “You can’t sue your way to the moon, no matter how good your lawyers are,” the Technoking quipped during a Code Conference event on Tuesday, and you know what? Fair. Perhaps unsurprisingly, Team Bezos did not find this amusing.

Still, it was somewhat absurd to learn that Project Kuiper — Amazon’s satellite branch — then sent a completely unsolicited email to The Verge defending Dear Leader Jeff’s space company by providing a 13-page categorized list of past SpaceX legal entanglements with the government that stretches back to 2004. Totally normal behavior you want to see from people responsible for sending human beings into the depths of space.

Yes. 13 pages long — “Attached is a list of some of the times SpaceX has sued the U.S. government on procurement matters and protested various governmental decisions... It is difficult to reconcile their own historical record with their recent position on others filing similar actions,” a Project Kuiper spokesperson wrote in the message. “We agree fully,” someone from Blue Origin confirmed to The Verge when followed up for comment. Very cool and normal and good stuff here.

Didn’t take long for Musk to see it — Not long after The Verge published Amazon’s meticulous Burn Book of SpaceX litigations, Elon Musk came to his company’s defense via — where else — Twitter. “SpaceX has sued to be *allowed* to compete,” Musk tweeted, adding that Blue Origin instead “is suing to stop competition.” Po-tay-to/Po-tah-to.

It’s a bit of a semantic argument there, and one that honestly doesn’t matter in the grand scheme of things. NASA wants to go with SpaceX and has every right to do so, especially when Blue Origin’s alternative didn’t even take into account the darkness of space.

The Bezos Multiverse — Zooming out a bit here, it’s definitely disconcerting to see a completely separate business entity (Amazon/Project Kuiper) go to bat for another Bezos brand (Blue Origin), with these organizations working in tandem to promote its overseer’s goals. It gets even more troublesome when you consider just how powerful any one of these companies are, with Amazon obviously leading the pack. If only there was a term to describe this kind of situation where a single person or group consolidates all of its economic and political power to stifle any and all competition...