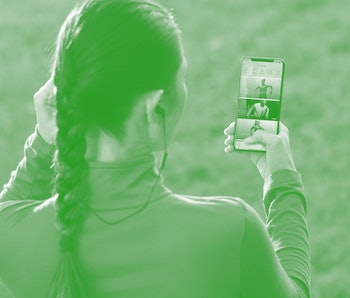 Peloton’s devices might kill your children or randomly become unusable, but the company sure does know how to compensate its contributors. The exercise equipment company pays a substantial 3.1 cents per stream of music on its platform. That’s well above the 0.35 cents per stream offered by Spotify, according to Trichordist’s “Streaming Price Bible.”

Even Tidal, the music-streaming company founded upon the basis of paying artists better for their work, doesn’t offer such high per-stream payouts; the company only offers 0.88 cents per stream. Which to be fair is still much better than YouTube’s 0.15 cents per stream, but that’s not exactly a high bar.

Peloton’s rates aren’t the best around town, though. Facebook actually pays more than 5 cents per stream, thanks to direct monetization options.

It comes as something of a surprise that Peloton pays musicians so well, given its high-priced subscriptions and general penchant for prioritizing profits. But a closer look at why, exactly, Peloton pays so much more than the biggest streaming services illustrates it’s not exactly for altruistic reasons.

How’s this work? — Because the music industry’s intellectual property laws are convoluted and difficult to understand, so too are the reasons behind Peloton’s high payout rates. Thankfully Slate has a pretty concise explainer about the process.

Here’s the short version. Where a pure streaming service like Spotify or Tidal only pays artists one fee per stream (a “mechanical royalty”), Peloton actually has to pay a second “performance royalty.” That’s because the songs are used as part of Peloton’s exercise classes, which are technically performances. And then there are payouts to middlemen (called performance rights organizations, or PROs) and other longevity-skewed deals.

Basically, it’s very expensive for Peloton to correctly license and pay for music, and hence the payouts are larger than usual, too.

But music isn’t Peloton’s thing, really — The 3.1 cents per stream is far beyond what companies like Spotify and Apple Music pay artists, but Peloton’s total contributions to these artists aren’t exactly groundbreaking. Peloton curates its own streaming catalog, which means you can’t just log in and play any song you want. Peloton’s total payout to the music industry in 2020 was approximately $35 million, compared to Spotify’s more than $5 billion.

And the company’s payout percentage has gone down significantly in recent years — in 2017 it was paying more than 5 cents per stream. That downward trend is likely to continue.

It’s also useful to consider the fact that an all-access Peloton subscription costs users $39 per month in the United States, whereas an entire five-person family of Spotify listeners can pay $15 per month. The amount of money from your Peloton subscription that actually goes to an artist is fairly small.

So no, Peloton isn’t coming to save the music industry or revolutionize streaming. It’s caught in a web of IP laws that force it to pay more than a company like Spotify does — but it’s just as greedy.