“We've been selling Peak Design products on Amazon for years, and we work closely with Amazon to remove counterfeit and copycat products from their marketplace. Hence, we were astonished when we found out Amazon had copied one of our bestselling bags.” 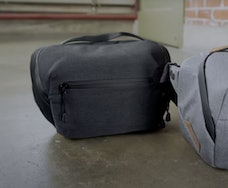 Remember when footwear manufacturer Allbirds said Amazon copied its shoe design? Well, Amazon is at it again. Bag manufacturer Peak Design has accused the company of copying its Everyday Sling bag to the point where it's actually hard to tell Peak Design and Amazon’s bags apart. In a delightfully sarcastic video uploaded to YouTube, the company criticizes Amazon for doing one of the biggest no-no's in fair market practices: copying a company's product.

Peak Design's Everyday Sling bag is light, small, comes in three different sizes, and is weatherproof, with a "100 percent recycled 400D shell [that] keeps your [photography] gear safe." It looks like Amazon didn't even bother to differentiate itself from Peak Design's style by adding details that are even remotely unique. Here's a side-by-side:

Peak Design’s bag originally entered the market in 2017 while Amazon’s "Everyday" bag came out in 2020. And Peak, which boasts carbon neutrality as one of its goals, assures consumers that the makers of the Everyday Sling are fairly paid, which can’t be said for Amazon workers.

We’re not surprised — In the Peak Design video, the company dramatizes what could have happened behind the scenes: Amazon employees noticed that Peak Design's sling bag was selling like hot cakes in the marketplace and decided to copy it, inch for inch, and sell it off. In the background of the dramatization, the formula for this business launch is simply, "Ctrl C, Ctrl V."

Peak Design notes, "We've been selling Peak Design products on Amazon for years, and we work closely with Amazon to remove counterfeit and copycat products from their marketplace. Hence, we were astonished when we found out Amazon had copied one of our bestselling bags. They call it the "Everyday Sling," which, funny enough, is exactly what we call our product.”

So far, Amazon has not commented on the accusation. But this isn’t the first time that Amazon has been accused of unfair competition and it won’t be the last. In the past, former and current employees informed the Wall Street Journal that Amazon regularly accessed third-party vendor data to thwart competition. One of those anonymous employees told the newspaper, "We knew we shouldn't. But at the same time, we are making Amazon-branded products, and we want them to sell." At the release of the report, Amazon officially stated that it was against its workers using confidential data to game the market and would launch an internal investigation into the matter.

Clearly, that probe has yet to yield accountability and transparency.