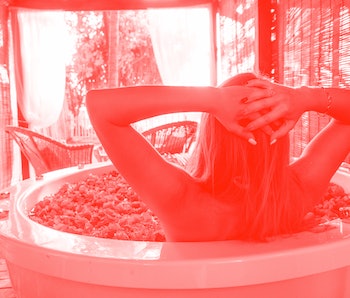 Some members of right-wing social media platform Parler want to #keepamericasexy. Reporting from The Washington Post details how Parler’s relatively laissez-faire approach to moderation invites swaths of sexual imagery to the platform. Pornographic images of adults are classified as free speech, according to the U.S. Supreme Court, but this wasn’t the First Amendment-fueled content executives at Parler were hoping for. They'd hoped they could turn Trump's opprobrium at Twitter and Facebook into stratospheric growth they could one day monetize, but that's going to be hard if they can't rein in the smut problem they now face, which is particularly vexing to some of their, ahem, more conservative users.

When users flag inappropriate content, it goes to the moderators who vote on whether it goes further in the process, can pull outright illegal content, and otherwise ascribe points to the offending poster. The accumulation of points can eventually lead to a ban, but the exact number required to reach this point is unknown.

Parler has taken a harder line on these kinds of posts in recent months, but they still litter the site as the company refuses to alter its moderation infrastructure. As more people join the platform, the likelihood of extremely disturbing content appearing increases. Putting the onus of keeping the platform clean on human moderators could have damaging psychological effects. Moderators at Facebook, Google, and YouTube have suffered to this effect and those companies have AI to take some of the weight off their shoulders.

A double-edged sword — If sex workers wanted to take advantage of Parler’s anti-censorship mission, it could be an unexpected haven in an internet ravaged by FOSTA / SESTA. While the bill is meant to curb sex trafficking, it has largely pushed sex workers off social media (and nailed Tumblr’s coffin shut).

Parler must now dance along the line of not allowing illegal posts and explaining why pornography isn’t worthy of the free speech protections it gives misinformation and violent rhetoric. It’d be great to grab some popcorn, sprinkle it with conservative tears, and enjoy the show, if only it wasn’t so likely that sex workers, once again, will fare the worst.