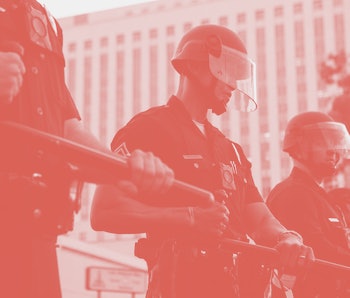 On Tuesday, BuzzFeed News shared two Palantir training documents for the Los Angeles Police Department, obtained using a Freedom of Information Act (FOIA) request. The Intermediate and Advanced Course materials outline just how much information L.A.’s local law enforcement has on its citizens, from license plates to distinguishing marks to vague criminal associations. There are nearly 5,000 Palantir accounts in use at the LAPD, representing more than half of the police force.

The long road to a surveillance state — Following a massive corruption and suspect abuse scandal in the LAPD’s gang unit back at the turn of the century, the Department of Justice placed the LAPD under a consent decree. The decree required the department to make substantial reforms and opened it up to federal audits. Eager to escape transparency, the LAPD brought in William Bratton — who introduced the crime-mapping program CompStat — to establish data-driven policing to get out of the decree’s scrutiny.

As part of the Los Angeles Strategic Extraction and Restoration (LASER) initiative, the LAPD started using Palantir in 2009 through a federal Smart Policing Initiative grant. LASER promised “precision policing” using the combination of a new crime-mapping tool PredPol and Palantir. In 2014, the department upgraded its system to include license plate data organizer Thunderbird using $2.9 million of its Urban Areas Security Initiative Grant money from FEMA. These technologies aimed to prevent crime by increasing police presence with high crime rates.

The LAPD started using Palantir in 2009.

Palantir pulls even more info than you think — Anyone with a Palantir account can pull up complex dossiers in no time at all. The system essentially creates a web of information not limited to names, race, gender, addresses, and contact information. From vehicles, warrants, mugshots, and gang memberships to tattoos, scars, surveillance photos, and personal relationships, the system pulls specific information from the department’s own policing efforts and allows officers to search the database using most of these parameters.

Palantir can easily get a snapshot of a community, complete with visualizations of law enforcement interactions and the mapping of gang turf using license plates and warrant addresses. The Advanced Course training manual even shows how officers can import private telecom data (in this case, from Verizon) and the software will supply both phone numbers, the date, call duration, and exact location of the cell towers used.

6 out of the 13 LASER Zones had the same, if not worse violent crime rates than non-LASER Zones.

The training guides don’t clarify whether these Chronic Offenders were considered suspects, simply associated with one, had been interviewed by the police, or just happened to be in the area of a crime. Officers weren’t trained to assess the names produced by the software and people weren’t always notified that they were on the list. The only way to remove oneself from the list was through a court order. These bulletins are reportedly no longer created.

“[Palantir] is not actually improving things,” organizer at the Latinx advocacy group Mijente, Jacinta González told BuzzFeed News. “It's expanding the power that police have. And it’s minimizing the right that communities have to fight back, because many times, the surveillance is done in secretive ways. It's ridiculous the community doesn't know what Palantir is doing in their city, and we have to wait until you get FOIA documents to actually understand.”

A 2019 LAPD inspector general report showed that most people flagged by the bulletins were Black or brown — 53 percent Latinx and 32 percent Black. These groups combined make up less than 60 percent of the Los Angeles population. The report also found that six out of the 13 LASER Zones had the same, if not worse violent crime rates than non-LASER Zones.

Nothing’s changed — The LAPD stopped using PredPol in April, citing its cost and activist pushback, and LASER was axed in 2019. The department still uses Palantir under the new Data-Informed, Community-Focused Policing program. This program is meant to be LASER’s ethical successor, but functions almost identically. The most notable difference? In addition to violent crimes, the program now surveils those suspected of nonviolent property crime in a move towards “broken windows” policing, a recurrent source of violent police escalation.

The full BuzzFeed News report can be read here.