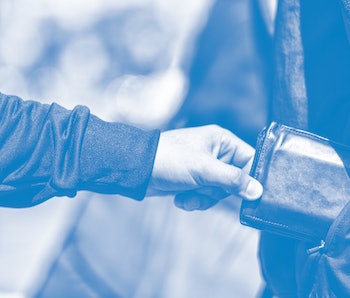 The tweet concludes that OnlyFans is stealing from creators as an underhanded way of paying back taxes the company owes to the U.K. government. In order to do this, the tweet says, OnlyFans is blocking creators while profits are still waiting to be withdrawn from their site accounts. Those earnings then go back to the company.

“There’s no policy against this,” @caseywaves says. “Withdraw your money every chance you get.”

What OnlyFans says — In an emailed statement to Input, OnlyFans said: “The claim of accounts being purposefully removed by OnlyFans is false.”

The company added that, in almost all cases, creators who violate OnlyFans’ terms have their accounts temporarily restricted or suspended pending investigation — not banned outright, as the viral tweet claims. Only the most serious cases, such as fraud, are treated with deactivation.

About those taxes… One part, at least, of the viral tweet is accurate: OnlyFans is dealing with some taxation frustrations. The company said it has indeed implemented changes to how it treats its income from the U.K. and the EU since July 1, 2020.

“This represents a change of basis for VAT purpose, making OnlyFans the principal on the sale as opposed to the agent,” the company said. VAT is a value-added tax utilized in the U.K. and the EU.

It’s possible OnlyFans should have been collecting this tax from subscribers and paying it to the British government for the entirety of its existence. OnlyFans confirmed to Input that “OnlyFans’ tax position since inception is being reviewed.” The U.K. tax office could potentially double the owed taxes as a penalty — making an already-high bill lean toward the astronomical.

The U.K. tax office refused to comment about any particular business, but it also confirmed to Sky News that there have been “no recent changes to the VAT rules relating to electronically supplied services and digital platforms.”

Fine for now — OnlyFans has yet to reach a conclusion with U.K. tax officials. It’s unclear how much, exactly, any decision will impact the company’s revenue.

In the meantime, OnlyFans wants its content creators to rest easy knowing their experience on the site won’t change. “Any potential tax obligation arising from the switch of VAT basis would not have an impact on the continued operations of the business which continues to grow rapidly in every region,” the company concluded in its statement.