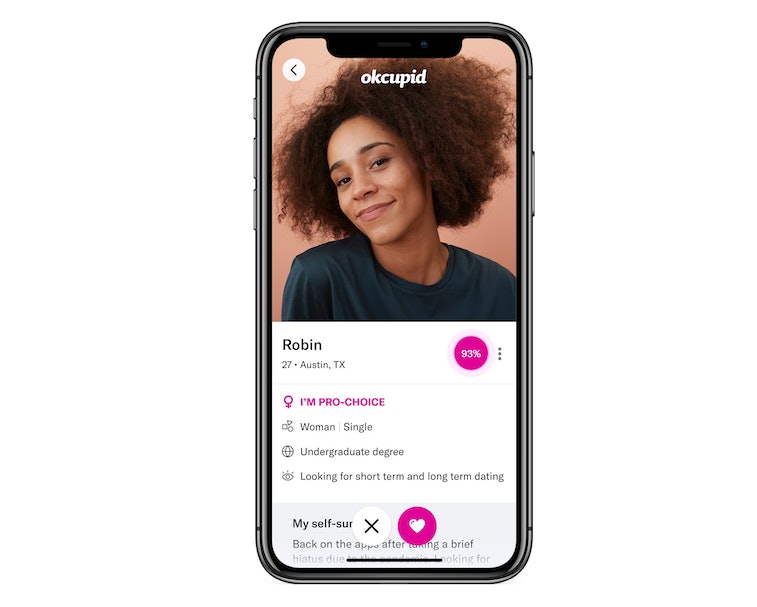 In light of Texas’ Senate Bill 8, which made abortion after six weeks illegal, OkCupid is introducing a feature to show off users’ pro-choice values. Users now have the option to display a bright, all-caps badge stating “I’m Pro-Choice” at the top of their profiles, as well as a filter to search only for other profiles that identify as pro-choice.

“Given the new, radical Texas law that essentially bans abortion access, it’s more important than ever to take a stand and we’ve found that our users want to be able to choose to filter for dates who are pro-choice more than they ever have before,” the company wrote in its announcement.

The pro-choice badge is available in the United States beginning today. OkCupid will pose the question, “Do you want to add the Pro-Choice badge to your profile demonstrating your support of reproductive rights?” and anyone who answers yes will see the new badge on their profile just above their demographic info.

A new filter, too — OkCupid’s early polling results point to a pretty overwhelming pro-choice user contingent. In the past, a total of 88 percent of users, when prompted, said they were indeed pro-choice — and that number is more like 95 percent when it comes to women in Texas. Overall, the number of users putting “pro-choice” in their profile bios has gone up more than 18 percent this summer alone.

To help users weed out potential matches who don’t care about their reproductive rights, OkCupid is also introducing a pro-choice search filter. The filter will only be available to those who have selected the pro-choice badge. OkCupid says a similar badge released a few years ago — one specifically showing support for Planned Parenthood — resulted in those with the badge receiving nine times more likes than those who opted out.

Speaking out and loud — This pro-choice badge isn’t the first time OkCupid has been vocal about abortion access. Shar Dubey, the CEO of OkCupid’s parent company Match Group, has been one of the few tech execs speaking out about Texas’ incredibly restrictive new abortion law.

“I am shocked that I now live in a state where women's reproductive laws are more regressive than most of the world, including India," Dubey said. "Surely everyone should see the danger of this highly punitive and unfair law that doesn't even make an exception for victims of rape or incest."

Besides simply showing support for abortion rights, choosing to display the new badge will also make a real-life difference in the fight against abortion restrictions. OkCupid has pledged $1 for every user who chooses the pro-choice badge to be donated to Planned Parenthood, up to $50,000.