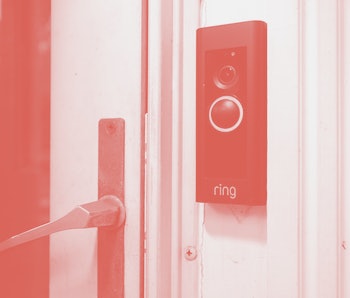 Law enforcement in Jackson, Mississippi is testing the use of Ring doorbell cameras in its surveillance efforts because that’s apparently a legal thing they can do. The Jackson Free Press reports that police will only tap into devices owned by businesses and residents who consent to be part of the 45-day pilot program.

While the scope of the project is very narrow for the time being, it’s already sending up gigantic red flags for privacy watchdogs like the American Civil Liberties Union (ACLU). Matthew Guariglia, a policy analyst at the non-profit organization, called the program its “worst fears” being confirmed.

Amazon-owned Ring has long raised concerns over privacy issues — far beyond those created by traditional security cameras. And then there are the larger concerns that this type of program makes crystal clear, like the blurred lines of surveillance consent.

Ring is… not great — Let’s pretend for a minute that surveillance is totally cool and works well and doesn’t generally threaten personal privacy or result in false positives that could ruin lives. Even then — even without those overarching concerns — there’s reason to worry about Ring’s involvement.

The last year has been pretty horrible for Ring’s reputation. The company’s Android app reportedly allowed Facebook and other third parties to track users; device passwords have been leaked on the dark web; hackers have directly harassed people using Ring cameras; Ring has had to fire employees for watching users’ video feeds on the job. The company’s security issues are pressing enough that it’s faced legal recourse over them.

The company itself has clarified that it isn’t directly involved in the program. But its products are, which is the real issue here.

About that consent — The new program’s opt-in is much better than law enforcement accessing video feeds without any consent at all — but it’s not enough. The problem is that the people being recorded by the Ring camera haven’t themselves consented to the recording.

“In Jackson, this footage can now be live-streamed directly onto a dozen monitors scrutinized by police around the clock,” Guariglia writes in his post. “Even if you refuse to allow your footage to be used that way, your neighbor’s camera pointed at your house may still be transmitting directly to the police.”

This technique is purposefully underhanded. Your neighborhood would likely be concerned if the cops came through installing dozens of surveillance cameras — by using Ring cameras instead, law enforcement can create a surveillance net without the general population even being aware it exists. Even better, it effectively means private citizens are paying for police to surveil them.

The ACLU is urging lawmakers in Jackson to fight the new program. Hopefully, it’s put to rest before the Nest drones make it to Mississippi homes.