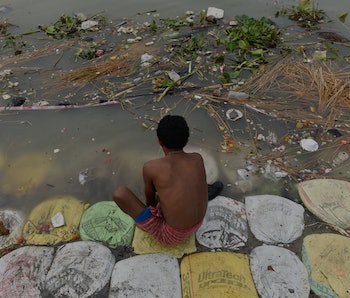 The non-profit environmental organization Ocean Cleanup has a self-explanatory mission: removing man-made waste from oceans like it does in the Great Pacific Garbage Patch. Now Ocean Cleanup wants to do the same for some 1,000 of the world's filthiest rivers, and thereby stop waste from getting into oceans in the first place. In a partnership with crane company Konecranes, Ocean Cleanup is planning to expand its rivers project. Some of it is already in effect in Malaysia, Indonesia, and the Dominican Republic.

Ocean Cleanup's claim to fame is its growing fleet of Interceptors, customized catamarans that using floating barriers and conveyor belts to extract plastic and other debris from waterways. The trash is moved into onboard dumpsters and that use sensors to let workers know when they've reached capacity. Then conventional waste management facilities take it from there.

It sounds like a straightforward task but the amount of equipment, energy, and attention required to keep these natural bodies of water from turning into aquatic graveyards of plastic-strangled creatures is breathtaking. These catamarans run on solar energy and can remove as high as 110,200 pounds of trash from a waterway each day.

Not just for emerging markets — Environmental matters are bleak in the United States as well. A Natural Resources Defense Council (NRDC) report cites the United States Environmental Protection Agency's research: almost half of the natural water bodies in the country — including rivers, lakes, and dams — are not safe for recreational activity like swimming, let alone clean enough to drink. Industrially produced metallic waste and municipal pollution carries deep into these waters, affecting the creatures within them, and those living near them or otherwise affected by them.

The NRDC notes that, for example, there is so much pollution in most U.S. rivers that tuna and other fish in them carry dangerous amounts of mercury.

Adding these waste-removing catamarans from Ocean Cleanup to American rivers could help improve local ecosystems enormously while also limiting how much material makes it out into the ocean.

But Interceptors alone cannot cure polluted rivers. Improving the conditions of our natural water bodies starts by discouraging people from dumping waste in them in the first place. And that's a far larger project.