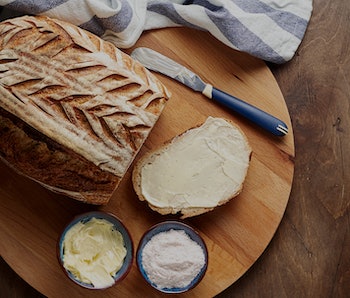 It looks like everyone is baking these days. Whether it is focaccia, banana bread, brioche, naan, ciabatta, pita, challah, lavash or tandoori roti, people under lockdown orders are turning to creative tasks to kill time and fill their bellies. But no other type of bread has seen such a powerful rise in popularity quite like the good ol' sourdough.

It makes sense then that it was only a matter of time that smart kitchen enthusiasts would eye sourdough baking and offer their DIY ideas. One such gadget comes from Twilio’s Christine Sunu who created Sourd.Io, which gauges the humidity, temperature, and rise time for your starter. It even sends you an alert when it's ready. But while it sounds pleasant in theory, this would be an inconvenience in practice — especially under quarantine where manual quantification keeps you busy and involved.

You don't need the tracker's internet connectivity to do that for you. Baking — much like the bulk of kitchen activities — is best done when it follows the elegant law of simplicity and stays completely clear of kitchen tech meddling.

What the hell is a starter? — If you're not familiar with sourdough bread and don't know what in God's name a "starter" is, here's a quick 101. The starter is fermented dough. That's it. For thousands and thousands of years — before smart kitchen conferences were even a thing and Revolution made a $299.95 touchscreen toaster — our ancestors simply mixed flour and water together, gave it a few days to rise while bacteria did its work, and then used that cultivation to create some of the best bread on earth.

Baking oughta be simple — If you've been doomscrolling under lockdown, you have probably noticed the vast and rather sudden abundance of baked breads all over the internet. It turns out that baking during quarantine kills the extra hours while giving the baker an impression that they're doing something productive with a delicious reward at the very end — even if these attempts go awry sometimes.

The amount of manual work, timing, attention, and dedication that goes into baking the ideal loaf of bread may sound daunting to a beginner initially. But under social isolation, that effort is actually therapeutic. You don't want a tracker to do half the job — which is essentially guesswork — for you. After all, baking is a form of stress release nestled inside very common and old fashioned techniques.

Time-intensive cooking projects like making sourdough bread give people a sense of control over their lives during otherwise uncertain and unpredictable times. This isn't to say that putting the most delicious sourdough bread on the table is the be-all-end-all remedy for the anxiety you feel right now. But doing it on your own — without relying on smart kitchen gadgets — can provide a sense of accomplishment, certainty, community with others, and sustenance. If nothing else, it's a good source of laughter when things don't go as planned.

When you consider these subtle facets underpinning the nature of baking, it becomes obvious that that beautiful slice of freshly baked catharsis doesn't need a tracker. Your pretty eyes alone will do.