'Charlie Bit My Finger' is getting the most extreme NFT treatment 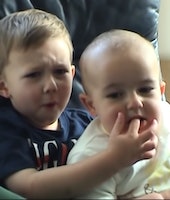 The number of views "Charlie bit my finger - again!" has racked up since its debut 14 years ago.

We truly aren’t sure how to feel about NFTs at this point. For every decent, fun, and/or ethically responsible non-fungible token project on the market, there are countless terrible (and we do mean terrible) counterexamples that make good arguments for abandoning the whole trend altogether and salting the digital earth behind us. But today we have learned of a pretty solid, if still exhausting, use of the NFT hype courtesy of our neighbors from across the pond: the family responsible for one of YouTube’s first majorly viral videos, “Charlie bit my finger,” is selling the exclusive rights to the 55-second home movie clip. It’s up for auction beginning May 22, with the promise of deleting the original upload from YouTube upon the sale’s completion to ensure some form of scarcity.

“Seen by over 880 million people, Charlie Bit My Finger is the most-viewed viral video of all time. The beloved clip has become a household name and holds a special place in the hearts of many,” reads the official Charlie Bit Me! website (yes... there is an official website). In addition to winning this official 1/1 NFT, the new owner of a piece of pop internet history “will also get the opportunity to create their own parody of the video featuring the original stars, Harry and Charlie.”

... okay, you know what? That’s it. We’re now officially opposed to NFTs. This is, once again, all your fault, Charlie.

How time flies — Wanna feel old? The “Wanna feel old” meme first began cropping up nearly a decade ago. Wanna feel really old? The “Charlie Bit Me!” stars, Harry and Charlie Davies-Carr, are respectively 17- and 15-years-old, according to the Davies-Carr family’s website. It’s been 14 years since their parents innocently uploaded the original video to a then-2-year-old YouTube, and well... you know... a lot has happened in the world since then. As they put it, the siblings are “soon entering adulthood and embarking on the next chapter of their lives, the perfect opportunity to embrace the next iteration of the internet.”

Tap that well dry — Translation (as we see it): Harry and Charlie are about to head off to university, so why not cash in on the meme-world touchstone and squeeze some last drops of money out of a viral video whose generational relevance is fading by the month? But hey, we don’t blame ‘em. After all, how often do any one of us feel like a toddler’s delicate finger trapped in the universe’s cavernous, teething maw?

There isn’t any clear end date for the newest auction, but the bidding will take place via the Origin NFT Launchpad, and will accept Ethereum-backed stablecoins like “Origin Dollar (OUSD), DAI, USDC, and USDT.” So have at it, out-of-touch millionaires: Let’s see how much money you throw away on a widely accessible, 14-year-old, less-than-a-minute-long YouTube video.