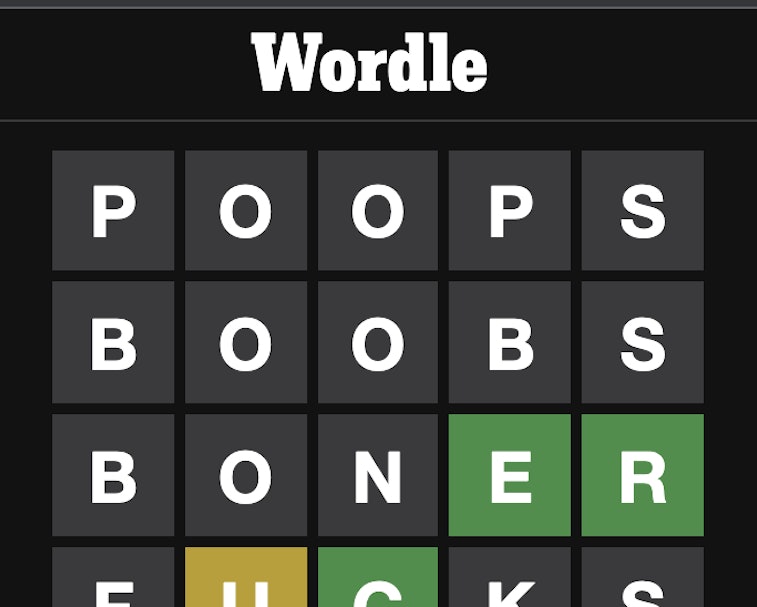 Wordle belongs solely to The New York Times, which infers a number of unfortunate inevitabilities:

All the words fit to print — As Polygon noted earlier today, keen-eyed (and filthy-mouthed) players have noticed certain guesses are no longer allowed by the NYT-ported Wordle. “Certain gendered slurs — including ‘bitch,’ ‘whore,’ and ‘sluts’ — have been removed from Wordle’s dictionary. When you try to use any of those words, the game flashes a ‘not in word list’ message, forcing you to come up with a different guess.”

Okay, so that’s totally fine and makes sense. But seeing as how an NYT rep explains that “offensive words will always be omitted from consideration,” and that they “are still in the process of removing those words from the game play,” all the really good ones aren’t long for this Wordle world, either. Thankfully, as of writing this, some terms are still valid guesses, as you’ll see below. Smoke ‘em if you got ‘em, nerds.

A lot of great clones already exist — Although we shall mourn Wordle’s passing into the Realm of Paywalls, it’s such a simple (and, more importantly, non-copyrighted) game that there’s already a bunch of solid alternatives available to download and play. Our suggestions recently included a cool “Battle Royale” style option, a numbers-based option called Nerdle, as well as the self-explanatory and wonderful Queerdle. That said, there are even more shameless knockoffs and grifter options, too, but we’ve also provided a quick run-down of some of those, too.