“To Purell, and Mr. Amazon, and Mr. eBay — if you continue the price gouging, we will introduce our product which is superior to your product.” 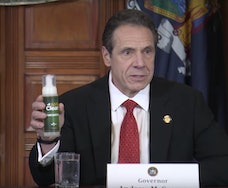 In a press conference this morning, Governor Andrew Cuomo slammed Amazon and eBay for allowing price-gouging for hand sanitizer sold on their sites. Cuomo also announced that New York State has already developed its own line of hand sanitizer, which will be produced by the state’s prison inmates. The hand sanitizer, which has a 75 percent alcohol content, will be provided to schools, prisons, the MTA, and other municipalities free of charge.

Cuomo declared a state of emergency yesterday in response to the spread of the novel coronavirus, which has risen to nearly 150 cases in New York state as of this morning. Most of those cases are concentrated in Westchester County.

Amazon’s response to price gouging on its site has not been swift enough to solve the issue in any real way. Cuomo is right to criticize the company’s response, which indicates Amazon has become too big for its own good.

New York will use prison labor for the effort — In his announcement, Cuomo said New York hopes to produce upwards of 100,000 gallons of hand sanitizer per week. Pumping out that much sanitizer will be no easy feat, so New York is turning to one of its top at-the-ready resources: prison labor.

The hand sanitizer is being produced by Corcraft, a long-time maker of hand sanitizer. Corcraft is known for using inmates as a major source of labor for its products. That means the cost to New York will be very low — because right now inmates make around $0.52 per hour for their work.

Cuomo estimates a gallon of hand sanitizer will cost the state around $6 to make: a low cost for the state but a high cost for its inmates, who will be paid nearly nothing for their part in reducing the spread of the coronavirus. For his part, Governor Cuomo made it clear that the sanitizer will be used in prisons, however. “We’ll be providing this to governmental agencies, schools, the MTA, prisons, etc.,” he said.

Amazon is too big for its own good — Amazon has been taking down price-gouged hand sanitizer listings, but the company’s efforts have been thwarted by those looking to make a quick buck (or a few hundred) off coronavirus fears. The company said last week that it’s blocked tens of thousands of listings already and has teams monitoring violations 24 hours per day.

The problem is that Amazon’s market for re-selling products is too large and complex for the company to handle at full capacity. Hand sanitizer is being listed at skyrocketing prices more quickly than Amazon can block them.

It’s obvious that Amazon’s open marketplace has the capacity to do more harm than good. The problem is serious enough that a phone line (1-800-697-1220) at the Attorney General’s office has been set up to report instances of price gouging. By taking matters into its own hands, New York state is being rightly proactive against the novel coronavirus.