“Amazon’s extreme profits and exponential growth rate came at the expense of the lives, health and safety of its frontline workers.” 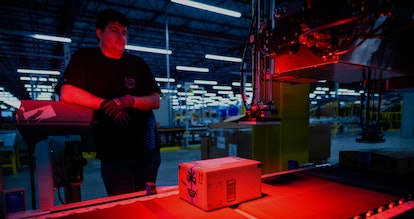 The state of New York has filed a lawsuit against Amazon, alleging that the tech giant purposefully disregarded COVID-19 safety measures and retaliated against workers who raised concerns over them. Letitia James, New York’s attorney general, filed the lawsuit Tuesday evening, The New York Times reports.

“Throughout the pandemic, Amazon has repeatedly and persistently failed to comply with its obligation to institute reasonable and adequate measures to protect its workers from the spread of the virus,” the lawsuit states. James focuses on two Amazon facilities in particular: JFK8, a fulfillment center in Staten Island, and DBK1, a distribution center in Queens.

New York’s lawsuit is damning but not shocking. Amazon has been under fire for its treatment of workers during the pandemic since… well, basically since day one of the pandemic. The company only relented to workers’ demands after serious criticism by health experts and the media. And — also unsurprisingly — the company still is not ready to assume responsibility for its actions.

Amazon’s not ready to face facts — Amazon knew this lawsuit was on its way and took the time to file a preemptive suit of its own last week. The company’s complaint totals 64 pages and attempts to argue that Amazon’s safety measures “far exceed what is required” under federal law.

There are plenty of facts — In its preemptive suit, Amazon attempts to argue that safety measures like free on-site COVID-19 testing and temperature checks are plenty to keep workers safe. But those measures were not put in place until the summer, well after workers had begun contracting the virus. At least 250 employees in the company’s Staten Island facility alone contracted the virus.

The Staten Island warehouse was the site of a walk-out protest last March around pandemic protections; that protest led to the retaliatory firing of Christian Smalls. The company later fired at least two more workers for being publicly critical of its pandemic response. At least one worker from the Staten Island facility died of COVID-19 complications.

Money over lives — Amazon’s overall pandemic response was so disastrous that the company decided to sell a heavily pre-edited script for news stations to attempt to control the narrative. Meanwhile — at least according to New York’s lawsuit — Amazon continued its lax health measures, like failing to close off and properly air out facilities where those who contracted the virus had been working, as required by New York law.

Amazon has profited enormously off the pandemic — profits that wouldn’t have been possible without its human workforce. And yet the tech giant continues to treat those workers as dispensable, as secondary to its quest for world domination.

Letitia James hopes the lawsuit will force Amazon to change its policies. That’s optimistic, to say the least