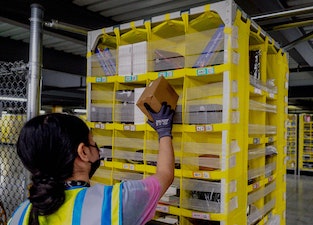 Despite its constant assurances that its warehouses are incredibly safe, Amazon workers just keep getting hurt on the job. The serious injury rate across Amazon warehouses rose by 15 percent last year, even after the tech giant spent $300 million toward ensuring worker safety. Another great year to be employed by “Earth’s Safest Place to Work.”

You might think the best way to address more than 34,000 of your employees being seriously injured would be to apologize and make changes. Amazon CEO Andy Jassy has decided to take a different approach: blaming the workers for their injuries. New workers, specifically.

“All the data we have says the incidents of injuries in the first six months is always higher than thereafter,” Jassy said in an interview with CNBC. (h/t Motherboard)

Victim-blaming isn’t a good look in any circumstance, but particularly so here. Amazon hires new warehouse workers in droves — and not just because customer demand keeps increasing. Hourly worker turnover at Amazon is about 150 percent each year. Perhaps fewer new workers would get injured if you didn’t have to keep replacing them?

Jassy is essentially attempting to skew the meaningfulness of these statistics by saying the numbers don’t take into account the hundreds of thousands of new hires at Amazon warehouses last year. There’s some truth to this statement; of course new workers are injured at higher rates while they grow used to warehouse operations.

The payoff to Jassy’s argument is missing because this is true of every warehouse. The key difference is that a significant number of Amazon’s new workers are hired to replace employees that have either left or been seriously injured themselves.

Let’s try something different — This is a conversation we’ve been having for years now. Whatever approach Amazon is taking obviously isn’t working. It’s growing exhausting.

Rather than blaming new employees for injury statistics, it would be in Amazon’s best interest to step out of its vicious cycle entirely by actually making its warehouses safer. Amazon says it spent $300 million on safety improvements last year; that budget might be worth revisiting, seeing as Amazon is worth $1.5 trillion.

But that kind of self-criticism seems impossible for Amazon. We’ll probably be right back here in a year or so reiterating the same conversation once again.