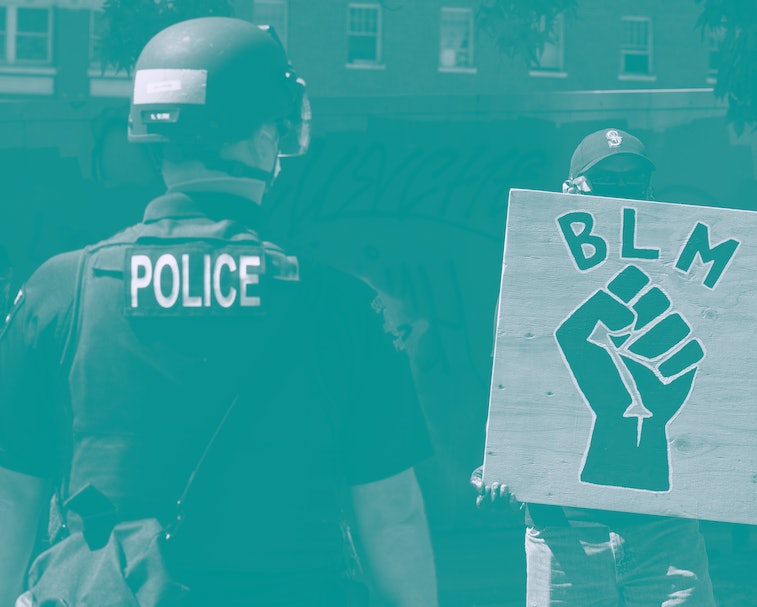 Last week, a police department in New Jersey attempted to bring cyber-harassment charges against five people who had retweeted a disparaging photo of a cop. Now the Essex County Prosecutor’s Office is moving to dismiss those charges. Katherine Carter, a spokesperson for the office, said on Friday afternoon that “after reviewing the cases, we concluded there was insufficient evidence to sustain our burden of proof.”

We’re breathing a hefty sigh of relief right now. If this case had gone through to the court system, it could have created a dangerous precedent around protest activity on social media.

Wait, what’s this case about? —The case centered on a since-deleted tweet containing a photograph of Detective Peter Sandomenico during a June Black Lives Matter demonstration in Nutley, New Jersey. Kevin Alfaro tweeted the photo with the caption: “if anyone knows who this bitch is throw his info under this tweet.” Alfaro’s GoFundMe page describes being confronted at the protest by pro-Christopher Columbus counter-protestors.

Alfaro, along with four people who retweeted the tweet, were charged with cyber harassment after the Nutley Police Department filed complaints in late July. Cyber harassment is a fourth-degree felony that’s punishable with up to 18 months in prison.

The Nutley Police Department’s complaint alleges that the tweet threatened the detective “acting in the performance of his duties, causing Detective Sandomenico to fear that harm will come to himself, family, and property.”

How did they find this tweet? — The charges are enough on their own to send anyone with social media into a rabbit hole of despair; if a relatively mild tweet such as this one could be used for fourth-degree felony charges, just imagine the damage a more vocally disparaging tweet could do.

Perhaps more disturbing still is the police department’s discovery and subsequent weaponization of the photo. It appears that, before being deleted, no one had actually been able to identify Detective Sandomenico. The tweet had seen minimal reach on the platform, with five retweets and nine likes.

As The Verge points out, it’s likely the Nutley Police Department discovered Alfaro’s tweet by using automated social media surveillance tools. Such tools have the ability to monitor all tweets sent from a particular location.

Doomed from the start — As alarming as the charges may be, it’s clear that it would’ve been very difficult for the Nutley Police Department to successfully bring a case against Alfaro and those who retweeted his tweet. Upon hearing news of the case, experts unilaterally agreed the prosecutors didn’t have a leg to stand on.

“The law is designed to prevent venal harm, not hypersensitivity and hurt feelings,” said Alexander Shalom, ACLU-NJ’s director of Supreme Court advocacy. “What this appears to be is a police officer flexing his ability to charge someone notwithstanding the fact that he cannot establish the elements of the crime.”

Phew — The case’s prosecutors now seem to have come to the same conclusion — and we’re very thankful that they have. Even without an ongoing pandemic to worry about, felony charges are expensive and very stressful for the accused. Alfaro and the four others affected by the charges have already felt strife from the charges; that would’ve only been made much worse if the case had continued.

If taken to court, this case would’ve sent far-reaching ripples across the social media landscape. Without specific laws around what does or does not constitute online harassment, the risk of being prosecuted for simply hitting the retweet button would create a culture of fear on the internet.

This particular case may be over, but its existence reveals just how far the world has to go in creating comprehensive laws and policies around internet usage. We’re operating right now with the bare minimum — with policies abstract enough to allow for felony charges to be created in their grey areas.