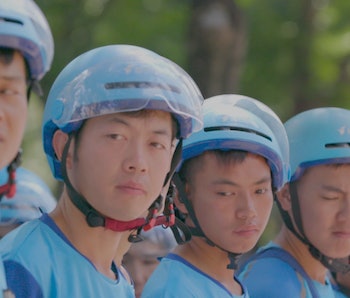 Gig workers power more of our modern conveniences than ever before, with companies like Uber, Amazon, and Instacart utilizing an on-demand workforce to carry out important business functions. Despite playing a pivotal role in these companies, gig workers are too often left behind when it comes to benefits, compensation, and other rights afforded to full-time workers.

The Gig is Up, a new documentary by Shannon Walsh, seeks to tell the story of the gig economy through those who power it. Too often our bird’s-eye view of the gig economy is dehumanizing in its scope; Walsh efficiently solves this by letting gig workers tell their own stories.

“Worldwide, there have been real efforts by workers to bring their issues into the public and to agitate for change,” Walsh, a current Guggenheim Fellow, writes in her director’s note. “I believe we are at the dawn of a global movement around the world of gig workers rising that we hope this film, alongside the incredible workers and insiders we have met in making this film, will be a part of.”

Workers in the spotlight — Walsh’s narrative is affecting and smooth. The Gig is Up’s best feature, though, is the myriad gig workers whose voices are given priority in the documentary. These are not new stories, but they are being highlighted in a way that makes them much more emotional than general reporting on the subject. (The documentary earns its subtitle, “A Very Human Tech Doc,” in spades.)

The problems with the gig economy are made sharp and clear in these interviews. A delivery driver in France named Sidiki tells of a time when he fell off his bike and worried first about the food being damaged — because a customer complaint could put him out of work entirely. Mitchell Amewieye, a gig worker in Lagos, Nigeria, tells Walsh about making an average of two dollars per hour answering questions to train AI, a gig he found on Amazon’s Mechanical Turk marketplace, a service that lets companies pay far-flung workers cents for small tasks. Each worker profile is intimate and captivating.

Also refreshing is the scale of Walsh’s documentary. In it, she travels far beyond U.S. borders to speak with gig workers in places like China, France, and Nigeria. In doing so the doc successfully portrays just how far-reaching the gig economy mindset is, despite the focus often falling on epicenters like California.

A global movement — The rise in gig workers has pushed conventional thinking about career paths into turmoil. Where working as an independent contractor long meant just that — working independently — it’s now been co-opted by corporations as a basis upon which to deny employees basic rights.

The Gig Is Up spends most of its time zooming in on the very real human casualties of the gig economy, and in doing so Walsh effectively puts on full display the dangers of continuing down this path unchecked. The gig economy is more than a nebulous concept here — it is a harsh reality, and one we must face sooner rather than later if we hope to minimize its damage. Those of us who use these services and regulators alike need to decide whether the convenience and affordability they promise are worth the knock-on effects.

The Gig is Up premieres at the Hot Docs festival this week.