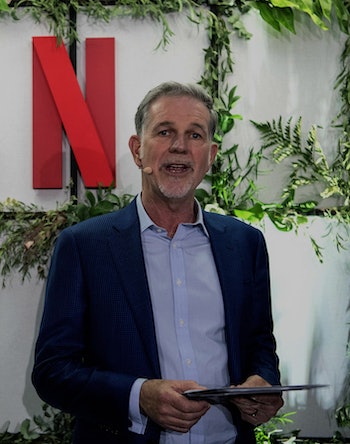 Netflix is a kingmaker. Under the cloak of its internal numbers, it determines the successes and failures of shows and movies. But the streaming platform only deigns to share its precious data with the public when it has a runaway hit on its hands like The Irishman or Stranger Things. When Netflix cancels critically acclaimed shows, however, there’s radio silence surrounding numbers. Viewers have the right to more transparency, but the people this policy impacts the most are marginalized creators.

“I would look at it like these are less financial metrics as they are cultural metrics,” Ted Sarandos, Netflix's chief content officer, said during an earnings call in January 2019. “I think it’s important for artists to understand, to have the audience also understand, the size of the reach of their work. So that’s why you’ll see us ramping up a little bit more and more and giving out — sharing a little more of that information.”

Though Sarandos appears to agree with the criticism of how Netflix handles its viewership numbers, the information the company eventually shared offered limited value. Oh, and it only came to light because the British government asked for clarity.

To understand Netflix's internal psychology, here are what it sees as the three types of Netflix viewers, according to the streaming company itself:

Starter and Completer data goes to creators after the first week and the first 28 days. Watcher data is “selectively shared” with creators and the public, but you’ll notice that only Completer data spans a full season. So, when Netflix says 64 million accounts watched season three of Stranger Things, that data includes people who didn’t make it past episode one. Going forward this will include people who watched two minutes of a given show. Oh, and we have no way of independently verifying that number.

Netflix is making decisions like a tech company rather than an entertainment company.

Netflix is making decisions like a tech company rather than an entertainment company. The streaming giant also revealed that it pits viewership against cost and how much the continued run of a show would affect someone’s subscription. The way we consume television, in particular, has changed in recent years to create room for niche audiences. Not everything needs to be a huge hit to deserve multiple seasons. Even in the pre-streaming Golden Age of Television, network executives knew this.

Friday Night Lights never managed to get much more than 6 million viewers a season, but survived the writer’s strike and a second season we’re just going to pretend never happened. A dedicated fan base was enough for NBC, and the series reaped numerous awards, including several Emmy nominations and wins. You don’t need tens of millions of viewers to earn prestige, and you certainly don’t need them in the first month.

The fate of Netflix’s American Vandal illustrates the ludicrous nature of how the company cancels shows. The first season earned a 97 percent Rotten Tomatoes score, an Emmy nomination, and a goddamn Peabody Award. A month after the second season launched, Netflix axed the show, spurring speculation that the use of an outside studio influenced the decision.

But niche TV doesn’t just mean supporting a season-long dick joke. It means sourcing work from unknown creators with different kinds of ideas – often people of color, women, and those with queer narratives. Who in their right mind cancels a show starring EGOT Rita Moreno and created by TV legend Norman Lear? One Day at a Time currently holds a 98 percent rating on Rotten Tomatoes, won an Emmy, and was nominated for dozens of awards during its Netflix run. And if you think it was canceled because of the traditional, multi-cam sitcom setup, Netflix released several shows with that same structure in the past month.

Other high-profile cancellations include Tuca and Bertie and The OA, both critically acclaimed, highly unique shows centered around and run by women. How many shows outside of The OA are [spoiler] throwing sentient, giant octopuses at their audience?! Tuca and Bertie was expected to join the ranks of the long-running Bojack Horseman, and The OA was well-documented as a five-season story.

In the case of Tuca and Bertie, many blame Netflix’s algorithm. Anecdotally, the show was pushed to friends who had seen both Bojack Horseman and at least one Ali Wong standup special. If you’d only seen one of the two, you likely had to search for the show. Comedian Jen Kirkman pointed out that Netflix often didn’t recommend her own second special to those who watched her first, underscoring the issue with relying on algorithms for promotion.

I am precisely the particular weirdo who was shown The OA right when it dropped, and I became an evangelist for the show during the years-long gap between seasons one and two. It was only after all that time of pure word-of-mouth marketing from a niche base that Netflix put some weight behind it, pushing ads outside of the platform for season two. Despite seeing how the fan base grew over time, it canceled the show not long after season two dropped.

Such unique stories deserved, at the very least, public transparency about why they were axed.

I can’t even bring myself to talk about Sense8 — brought to us by transgender sibling sci-fi directors Lana and Lilly Wachowski — except to say that it was the first high-profile incidence of Netflix silencing marginalized storytellers. Such unique stories deserved, at the very least, public transparency about why they were axed beyond the vague descriptors of "big, expensive show" and "tiny audience."

As for the movies, LuLu Wang, director of The Farewell, went as far as to pass on a major payday from Netflix. She instead opted to sign with indie studio A24 instead – in order to avoid this very fate. "It's not about the money," she stated in a director's roundtable with The Hollywood Reporter. Ultimately she felt that Netflix “wouldn’t have the energy to put behind” her when they “have so many esteemed, established directors.”

Certain shows like Stranger Things will keep getting renewed because of their massive audiences, especially when they’re easy canvases for product placement. They are the golden children whose report cards go on the fridge. As long as they remain affordable to produce (we’ll never know how many viewers tuned in for the $9 million-an-episode Sense8), Netflix will keep cranking out seasons.

At the end of the day, Netflix doesn’t really care about quality and longevity; it operates like a tech company or VC fund and not like a creative force with any kind of vision. It’s hemorrhaging money and getting more competition every month. It will keep throwing titles at the wall, hoping a shiny statue sticks, but, more importantly, that the numbers look like people are, indeed, still "watching."