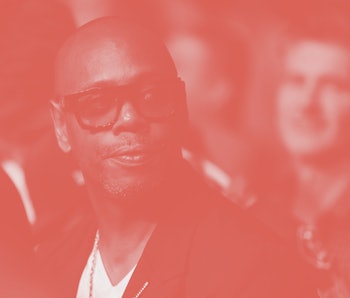 Dave Chapelle’s latest comedy special, The Closer, dropped on Netflix a little less than a week ago, and the internet has been abuzz over a series of queerphobic jokes included therein. Anger over the special’s explicitly anti-trans rhetoric hit such heights that Netflix co-CEO Ted Sarandos even took the time to write an all-staff memo about the backlash.

“Some people find the art of stand-up to be mean-spirited but our members enjoy it, and it’s an important part of our content offering,” Sarandos wrote.

Terra Field, a senior engineer at Netflix, has been particularly vocal about Netflix’s decision to publish Chapelle’s special. Field identifies as queer and trans; she published a thread about the harms Chapelle’s special does to the trans community.

Now Field has been suspended from her position at Netflix, pending a larger investigation. Netflix says the suspension is unrelated to Field’s decision to speak up, but the timing doesn’t look great.

Crashing the party — Field’s tweet thread quickly went viral; it spurred a full-fledged discourse on Twitter around the homophobic and transphobic hate underlining more than a handful of Chapelle’s jokes. The thread ended up garnering enough attention that, upon news of Field’s suspension, the internet reacted with even more blazing anger. It didn’t help that news of her suspension dropped on National Coming Out Day, either.

But Netflix maintains that Field’s suspension has nothing to do with her comments. Field reportedly attended a virtual conference to which only Netflix’s “top 500” employees were invited, and Netflix now says crashing the meeting led to her suspension. Two other employees allegedly face the same recourse.

“It is absolutely untrue to say that we have suspended any employees for tweeting about this show,” Netflix said in a statement to a number of media outlets. “Our employees are encouraged to disagree openly and we support their right to do so.”

Keeping space for hate — In his all-staff memo, Sarandos briefly discusses where Netflix “draws the line on hate.” He says Netflix doesn’t allow content “designed to incite hate for violence,” and that the company doesn’t believe Chapelle’s special crosses that line. This argument will sound very familiar to anyone who’s followed Facebook’s own evolving stance on hate speech — and it’s pretty clear how that’s worked out.

Sarandos says Netflix will not be removing Chapelle’s special, despite the backlash and criticism it's faced. The company has a valuable deal with Chapelle distributing his comedy specials; it would hurt Netflix’s bottom line to remove The Closer, so of course the company isn’t planning to do so.

Trans Netflix employees have reportedly been attempting to meet with executives for years to address transphobic content, one current employee told The Verge. The problem of The Closer and its fallout seems like it could’ve perhaps been avoided if Netflix had simply consulted with trans people at the company first.